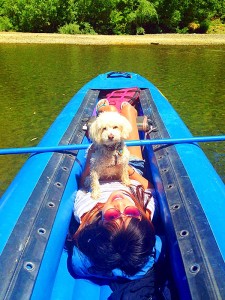 It seems like every year I hear the same thing from places all over the Bay Area, We’re not prepared for this weather! It’s summer. It gets hot. Be Prepared. OK, maybe in San Francisco that isn’t completely true except for this year where we’ve been hit by warmer than average temperatures for this time of year, but it’s the same type of heat we get in September so we got hit a few months early. It’s not like everyone puts their air conditioning in cold storage until September. Oh wait, San Franciscans don’t have air conditioning.

I’ll try and explain weather to all of you since it seems everyone forgets what it is every year around here. This could be due to all the newcomers that rotate in and out of the city every year, but summer in San Francisco isn’t supposed to be warm. It might be warm compared to Alaska [or Alturas which has got to be the coldest place in California], but it’s not what people expecting summer weather expect.

The reason it’s so odd is that [my apologies, I’m not a meteorologist] we get warm air over the water that hits the cold air over the land. The warm ocean air contains more moisture which condenses when it hits the cold land giving you…fog. Summer’s in San Francisco tend to be foggy around the coast with a few places like Potrero and the Mission where it burns off very quickly because they get the sun earlier in the day to warm the land and create a bit of equilibrium between the two.

For people who grew up here we have an old saying, You know you’re in San Francisco when you put on your heavy winter jacket to barbecue in July and make sure you’ve got a tank top on when you run out for a six pack in October.

San Francisco is kind of backwards weather wise and even then we don’t really have weather. It might get a few days into the freezing temperatures in December and January and we might get into the upper 90’s a couple of days in September and October. That’s pretty much the extremes we get. Snow is pretty much unheard of since 1976 and we don’t get tornados or hurricanes here either. We do get rain and hail, but our weather hasn’t gotten that message lately. We’ve been experiencing a rather dry year so far and while I can’t say that’s why it’s hot it’s just one of those things you should be prepared for.

Most San Franciscans already know to dress in layers so that shouldn’t be a problem and most people also carry water bottles so dehydration isn’t really a factor. Most of the companies that I’ve worked for also have air conditioning installed even though they hardly ever need it so the whole, we’re not prepared for this weather is kind of a joke to me.

We all have to go outside and even if you’ve been here only a couple of months you should know how to deal with the weather. If not then I suggest San Diego where the meteorologists are overpaid because every day is, nice.