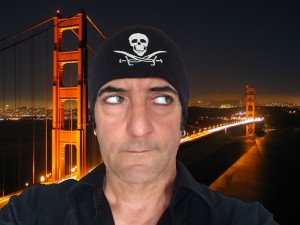 Eric Kauschen was one of the few native San Franciscans over 35 left in the city. He spent all of his life in San Francisco but has traveled around the country and world. He has yet to find a place like San Francisco, but unfortunately he recently had to relocate to the East Coast due to the ridiculous cost of living in San Francisco.

Eric grew up with a love of the writings of SF Chronicle columnist Herb Caen and since Herb has passed on, he works to bring the spirit and enthusiasm of San Francisco’s history and culture to people around the world.  He is currently a member of the Western Neighborhoods project that chronicles the history of San Francisco’s Sunset district that he calls home.

Eric Kauschen was born September 6th, 1962. He began his musical career at the age of four playing the piano by ear, figuring out popular songs of the time. With an instinctive feel for music he was accepted at the age of seven by a former concert pianist with the San Francisco Symphony, Francesca Browning.

Eric’s piano studies continued for nine years during which time he took part in numerous piano examinations securing a top award in the International Mozart category. During this period, Eric experimented with numerous other instruments including trumpet, flute, clarinet, marimba and tympani.

At the age of 16 Eric underwent a major change. Like so many musicians before him he discovered the guitar. Eric set aside all other instruments and began an intense period of study with San Francisco pop music icon Alex Guinness and later with international guitar impresario Joe Satriani. During this time Eric learned more than just how to play the guitar, he learned the theory behind Rock, Jazz and Classical music. Something his nine years of classical piano had never taught him. He learned to emulate the styles of many of the great guitarists and through a synthesis of their styles developed his own unique signature sound. During this time he served as guitarist for several local bands, most notably the self-proclaimed “San Francisco’s greatest unknown band–Black Wulf.”

While quite the aficionado of the huge Heavy Metal scene of the 80’s, Eric was drawn to many types of music outside the genre which led him back to his musical beginnings with a new twist. He began an exploration of electronic music and synthesizers. Eric served as the Assistant to the Director of San Francisco State University’s Electronic Music Studio, being instrumental in assembling an arsenal of synthesizers and related equipment for the students. Several of his early works were compiled and presented at the International Electronic Music Exposition in Italy in 1986. Most notable was the piece “Armageddon” a techno-dance piece that was considered many years ahead of its time.

Eric still had a strong affection for classical music and in discovering the works of Walter/Wendy Carlos developed a synergistic blend of classical composition and synthesizers. His first offering was the “The Symphony of the Nine Angles”. A hauntingly dark blend of classical stylings and H. P. Lovecraft imagery.

Eric is also a graphic designer and web developer with extensive experience in social media to help promote people and companies and search engine optimization (SEO) of websites to drive them to higher positions in web searches.