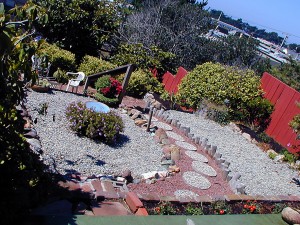 San Francisco is composed of four separate microclimates. I as you all know live in the fog belt. For a short six years I lived in the banana belt which the hipsters call the mission. Herein lies a problem if you own a house or rent one and want your backyard to look pretty.

My father used to get up on weekends, eat breakfast and go out into the yard about 10am and he wouldn’t come back until 4pm. I am not like my Dad. I am what you’d call the lazy man’s gardener. I don’t like going out every day and pulling weeds. Getting a hose down to the bottom of our 100′ backyard is a pain in the ass because of all the stuff that my Dad added in to our terraced backyard. 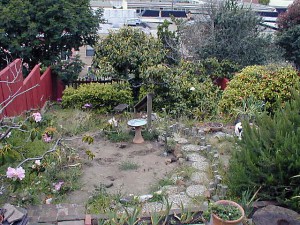 When my parents bought the house the backyard was pretty much flat and sand. My dad used to talk about how he’d take the dog and toss it over the back fence and let it run wild in the sand dunes that were behind us. San Francisco dirt is pretty much sand unless you bring it in from somewhere else, which is what my parents would do.

I think they spent the better part of a year driving to Muir Woods and digging up dirt and bringing it home in bags so that the water would stay in the soil for more than a couple of minutes. Still, while my Dad was a great gardner, he really sucked at landscaping. He was one of those, here’s dirt let’s stick a plant in it. That didn’t always work for him.  Well, most of the time it didn’t work for him unless you’re talking about the raised beds he built around the perimeter.

What he left us was basically a weed strewn sandy mess. We tried all kinds of plants. Foxgloves looked pretty good, but they died every year and you had to pull the remains out and replant. Annuals were not for us. We got an idea one day when we were looking at this tiny abused succulent called an Aeonium. We bought it in a tiny pot when we lived closer to the beach and stuck it in our window and forgot about it. It never grew because we hardly ever remembered to water it, but it wouldn’t die so decided to send it off to the graveyard for plants or what you would call, the backyard. 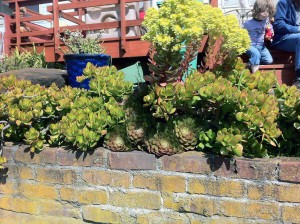 Oddly enough, the fog belt agreed with the aeonium. We didn’t have to water it because of the fog and rains so it started to grow. It moved up to 5″ pot, then a 10″ then finally to an 18″. During this time the winds had blown the pots over several times and broken off pieces. We just stuck those in the dirt of the bulkhead and they started to grow too.

Then my wife got the idea of taking the remains of the jade plants my Dad had in the front and putting them out in back. The brick bulkhead my Dad had built suddenly changed and became alive. The succulents started to grow and multiply filling in the entire bulkhead. We started to move them off to the sides and added landscape ground cover and blue river rocks to keep the weeds out.

Now our work is finished for the most part. We do have to go out a couple of times a year and spray some Round up to kill the weeds that sprout up on top of the landscape fabric, but we now have healthy plants that take little care. I kind of miss the citrus trees that we used to have out in the mission, but Meyer’s Lemon trees do hold up out here in the fog belt if you pay some attention to them. For now we’re happy with our succulents that don’t take much care. I may be a lazy gardener, but that at least looks better than our neighbors who hang their granny panties to dry on the clothesline in their sandy weed infested backyard.