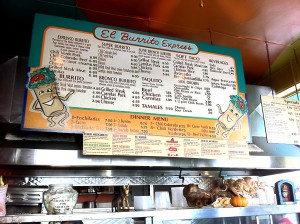 Thirty years ago when they opened, El Burrito Express was a god send to me. I was a broke college kid with a girlfriend who had a daughter and EBX was half a block away from her house. We would walk down and get a bean and cheese burrito for $3.65 and it would feed the three of us. And oh what a burrito it was. I’ve had burrito’s all over the city and yes, I will sound a bit sacralegious to folks out in El Mission, but I have never had a better burrito than here.

I had to laugh when they said a few years ago that due to the rising cost of supplies they would have to raise their price. The same burrito thirty years later is now $3.95. I can’t knock them for that. What changes they’ve undergone in that time period. Most places will usually trim down their menu to only what is essential. EBX, they’ve expanded it to the point they don’t have room to put up anymore signs and have to use paper attached to the front of their case to advertise their new El Gigante burrito in honor of  the Giants winning the World Series [note, the picture was from last night and they’ve re-arranged things and have done away with the paper signs]. Apparently they’ve also learned a lot about our new technologies and finally have their own website set up, will deliver, they are present on Facebook, YouTube and Twitter. That’s pretty impressive for a little burrito shop in the Sunset. I’ve found that calling in my orders works best here as they always seem to be crowded.

Enough about technology. Let’s talk about their food! As you can tell burritos are their main focus, but they have tacos, enchiladas, tamales, tortas as well. They’ve just added something called asada fries that’s kind of like their nachos except using french fries instead of their hand made tortilla chips. That’s more California than the place in the mission that makes a “California Burrito” I’ve spoken about before that’s a burrito with fries added into the mix. I’m going to start with the burritos because they are the best deal you’ll get. You’ve got a choice between the Regular and Bronco to start. The difference is that the regular has guacamole as an extra and the bronco has no rice and sliced avocado [my choice]. If you want a bigger version you ask for the Super burrito or Super Bronco. If you want even bigger than that you have to move up to the Expresso Burrito. This is one HUGE burrito. Two tortillas filled with cheese, beans, rice, meat rolled up and then covered in guacamole, their “special sauce”, more salsa and more cheese. This is the wet style [burrito mojado] and they seem to sell a lot of them.

Now I have at times been a big eater, but lately not so much so I’ve found I can cut one in half and get two days out of it. There was a time that I believe I was able to eat an entire burrito by myself, but I’m not sure. I’ve had their nachos, enchiladas, tostadas & tamales and they’re all good, but it’s the burrito’s that really shine. A personal tip if you’re someone that’s low on cash and needs a quick snack you can get their corn quesadilla’s for 90¢. They also have homemade aqua fresca’s and they also seem to be moving towards a more healthy way of serving their food with in store tips like, “hold the sour creme and add a whole wheat tortilla.” I like the fact that they are being socially responsible and not filling their customers up with tons of lard. They also have advertisements they’ve put on their Burrito TV youtube site that shows they have an interest in giving back to their community and taking care of it as well. See the video below. Note they also have a card you can get where you buy nine burrito’s and the tenth is free.