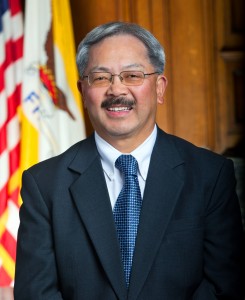 Well today I read that something everyone has been talking about finally pushed itself closer to a possibility. Interim Mayor Ed Lee is now considering running for Mayor of San Francisco after repeatedly denying that he wouldn’t run.

I’m not sure if when he said this that the Iron Queen, Rose Pak was behind him and had him in a half nelson or not, but it does change things a bit for the Mayoral race. First off, it makes all the current candidates make a Scooby-Doo face of shock followed by a rut da fuk? Then it makes them think about how they’re going to deal with this.

Jim Stearns of Stearns Consulting was the first out the gate to put together a video showing how many times Mayor Lee mentioned that he had no intentions what so ever to run for Mayor and that he was only going to be the interim Mayor. As some of you may know, Stearns Consulting is the group that is marketing Senator Leland Yee for Mayor and helped President of the Board of Supervisors David O’Chiu [see my piece on the Mayoral Debate for why he’s Irish.] to get where he is.

I haven’t heard of any of the other candidates response to this yet, but the Leland Yee camp was first out of the gate. Now I’ve taken a bit of flack for talking about Chinese politicians as being for the Chinese first and the rest of the people second. I have to say in Mayor Lee case, he is the opposite. Ed Lee is for the people, not just a growing majority of the people, or a growing majority of the people first, but he is for all the people. Besides, he’s one of the few Asians that can grow a full mustache. Maybe that’s why he’s for all of us. He’s been doing a great job and I hope he continues to do so until his term ends.

That being said, would he be a good choice? I’m not so sure. Being an interim Mayor, he doesn’t have to be a politician, he just needs to get the job done without any further agenda to fuel his career. If Mayor Lee runs for the position he already holds he will have to become a politician and I’m not sure  he’s ready to swim in those shark infested waters. Politicians are like diplomats, they can tell you to go to hell in such a way that you look forward to the trip. I don’t think Lee has that at the moment. When asked about shark fin soup, he’s said that he’s had it but never orders it because it’s too expensive. If it’s too expensive for someone on a government salary who is currently earning a Mayor of San Francisco’s salary then practically no one can afford it. We know the opposite to be true, contrary to what Senator Yee and Assemblywoman Ma would tell you.

Overall, I think Ed Lee is a great Mayor and that he was a the perfect choice to serve as an interim Mayor after Gavin Newsom left for Sacramento, but I also feel that his image will start to deteriorate if he runs for Mayor as a politician and wins. It will tarnish his image and probably cause him to go down in history with a less than favorable image. If he runs, Rose Pak will steal all the glory and be seen as a puppet master pulling the strings of politics in San Francisco which she is already seen as doing, but this would just make it worse.