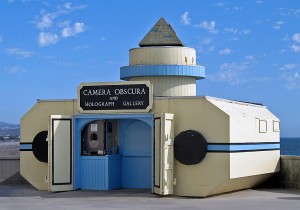 Go into a very dark room on a bright day. Make a small hole in a window cover and look at the opposite wall. What do you see? Magic! There in full color and movement will be the world outside the window — upside down! This magic is explained by a simple law of the physical world. Light travels in a straight line and when some of the rays reflected from a bright subject pass through a small hole in thin material they do not scatter but cross and reform as an upside down image on a flat surface held parallel to the hole. This law of optics was known in ancient times.

The earliest mention of this type of device was by the Chinese philosopher Mo-Ti (5th century BC). He formally recorded the creation of an inverted image formed by light rays passing through a pinhole into a darkened room. He called this darkened room a “collecting place” or the “locked treasure room.”

Aristotle (384-322 BC) understood the optical principle of the camera obscura. He viewed the crescent shape of a partially eclipsed sun projected on the ground through the holes in a sieve, and the gaps between leaves of a plane tree.

The Islamic scholar and scientist Alhazen (Abu Ali al-Hasan Ibn al-Haitham) (c.965 – 1039) gave a full account of the principle including experiments with five lanterns outside a room with a small hole.

In 1490 Leonardo Da Vinci gave two clear descriptions of the camera obscura in his notebooks. Many of the first camera obscuras were large rooms like that illustrated by the Dutch scientist Reinerus Gemma-Frisius in 1544 for use in observing a solar eclipse.

The image quality was improved with the addition of a convex lens into the aperture in the 16th century and the later addition of a mirror to reflect the image down onto a viewing surface. Giovanni Battista Della Porta in his 1558 book Magiae Naturalis recommended the use of this device as an aid for drawing for artists.

Thus are the words to describe a little known artifact of San Francisco history. Perched on an outcropping behind the Cliff House is a piece of San Francisco history that few people ever visit. It’s a shame because the Camera Obscura is an inexpensive place of wonder. For $3 you get to enter a 25′ x25′ box that has a couple or rotating lenses housed in a pyramid that shine down on a white parabolic disc in the center giving you a stunning view of the ocean and rocks of Ocean Beach and there’s no time limit on your stay.

I never went there are a kid, but oddly enough I suggested it to a friend from Texas when we took a trip out to Land’s End to see the ruins of Sutro Baths. At the time it was a dollar to get in which even in the 90’s seemed like a deal. As we entered, it felt like we had walked into some sort of ancient ritual chamber. It was quiet and there was some ambient music playing. We gazed into the disk and something old and magical happened. We were looking into something old, sort of Victorian in nature. There was no CGI involved here it was all a definitely what you see is what you get sort of thing. At the time there were still a few sea lions on Seal Rock and they looked so big that we imagined that one of them would reach out and bite us.

For those who get bored easily the walls contained a holograph gallery. It was a nice addition for those who are of the short attention span theater in nature, but not entirely necessary. We felt transported back in time to the late 1800’s when life was much more simple. We were much more aware of the world around us because this Camera Obscura was bringing what felt far away right up into our face. We walked around the central disk for about an hour mesmerized by the sights we were seeing even though we could have been outside and dropped a quarter into a telescope and seen the same thing. This was more real to us because it was so much bigger.