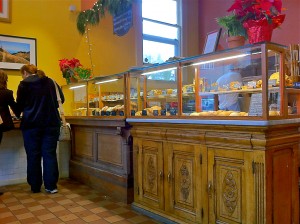 While I tend to like French food, its not something I seek out on a daily basis. My friend Clint who’s running off to Costa Rica decided we should get together for lunch before he left and he suggested La Boulange on Cole. I have to say that when I walked it I looked at the menu for about 30 seconds and my eyes were drawn to the display case.

This place was filled with sweet and savory delights that I didn’t expect. I’ve been to French restaurants before and they’ve been of two types. 1. Crappy food in great sauces and 2. Plain simple food. This was #2 with a bit of the saucy flair added. As I was browsing the display case I noticed the croque monsieur which is sort a French way of saying ham and cheese sandwich.  That’s simplifying things a bit, but essentially it’s a ham and cheese sandwich on white bread with a little bit of bechamel sauce instead of mayonaise [which was originally called sauce lyonnaise in French] then they take it one step further and add more cheese on top and broil it until the cheese melts.

While my arteries hurt while eating it I opted for the side green salad with a balsamic vinagrette. Not exactly the most French, but I’ll give them some slack as everyone had lots of piercing and tattoos here. On my first bite I just felt my eyes roll back in my head. This was awesome food and the sandwich, salad and a soda cost me less than $10. For the quality of the food, I have to say the price didn’t hurt and I wasn’t hungry after I finished. As a matter of fact I didn’t have that after Thanksgiving feeling where I wanted to lay down and have a nap.

My friend Clint did one of the cheapest things I could think of at the time, but understood why afterwards. They have a dessert section and he purchased ONE cookie. The cookie was the size of an oreo at best and was coated in the creamy fondant like coating. He broke it in half and handed me a piece. As we walked out the door I popped it into my mouth and after swallowing it two words burst out of my mouth…”OH SHIT!” This was one of the best tasting cookies I think I’ve ever had.

[mappress mapid=”19″]I want to take my wife back now so she can give it a try. She tends to be a bit selective on foods, but I know there’ll be something here she’ll like. Next time we’ll have to try the chocolate ganache dessert.