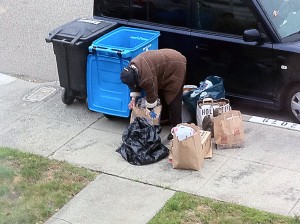 I was prompted to write today’s post by events of last night. Tuesday Morning is garbage pick up day for us and so we put our cans out Monday evening. I get preoccupied every Monday and I can put the cans out between 6pm and 10pm. The same thing happens every time I put them out. Within five minutes I hear a rustling outside to find the picture included with this post.

Now while you can’t exactly tell from this picture, the woman rifling through my recycling is an elderly Chinese woman. You can see them throughout the day traveling around with shopping carts filled with stolen recycling or rifling through public garbage cans on the street in commercial areas.

Here is where I have a couple of points I’d like to make:

These are not role models I want my daughter to learn and even though the people are nice when I encounter them saying thank you, they need to realize that I and other people in San Francisco don’t put out our recycling to support you. We put it out to support the city and help lower prices a bit. If you’re going to steal my recycling to cash in then I’m going to have to ask for a cut of your profit. After I’m finished with this article I am going to make a sign and put it on my recycling container that says, If you remove recycling from this container I expect to have a $20 bill dropped in my mailbox on the first of every month. If I do not receive $20 per month I will photograph you removing my property and turn it over to the police.