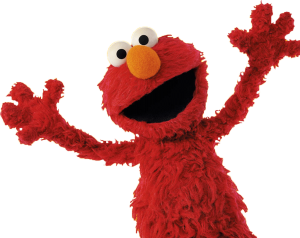 I have from an early age had an ear for voices. I could listen to many voices and then imitate them. When our daughter was born she like many kids loved Sesame Street and I started to pick up a few of the voices. Cookie Monster was my first that I got pretty well, but Elmo, Ernie and Grover are my best. Kermit, I mastered years ago and usually used that voice with rather inappropriate phrases that Kermit or the FCC wouldn’t allow.

Now having a daughter who is autistic you have to find a few ways to motivate her that are different than other kids. She has a hard time getting up in the mornings because she goes to sleep at 7:30pm and is out like a log until 7am. We are blessed in many ways by this.

Now, thankfully, I don’t look like any of the muppets and the funny part was when I saw the guy who does the voice of Elmo. He’s a big old hulk of a black man. You wouldn’t expect the Elmo voice to come out of his mouth and when he did the voice it was just so weird it was really funny. I did have a chance back in the 70’s when I was working at the California Academy of Sciences during a Laserium show, were pretty much everyone was on some form of illegal substance, to introduce the show using an Animal puppet from Dr. Teeth and the Electric Band. In case you forget Animal was the drummer. I got some good laughs from that one.

I already do voiceover work so maybe doing character voices for cartoons might be an option for me. I’ll have to check that out this year, but for right now, singing rubber ducky or Elmo’s song for daughter gives me enough of a treat.