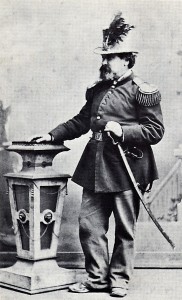 Emperor Norton was a very interesting man of the 1800’s. He’s rumored to be of English or South African descent, but his main claim to fame was when he invested his life savings of $40,000 in Peruvian rice after moving to San Francisco in 1849 and the market for Peruvian rice tanked. He tried to have his contract voided to hold onto his money, but wasn’t able to and left San Francisco.

When Norton returned to San Francisco from his self-imposed exile, he had become completely disgruntled with what he considered the vicissitudes and inadequacies of the legal and political structures of the United States. On September 17, 1859, he took matters into his own hands and distributed letters to the various newspapers in the city, proclaiming himself “Emperor of these United States”:

“At the peremptory request and desire of a large majority of the citizens of these United States, I, Joshua Norton, formerly of Algoa Bay, Cape of Good Hope, and now for the last 9 years and 10 months past of S. F., Cal., declare and proclaim myself Emperor of these U. S.; and in virtue of the authority thereby in me vested, do hereby order and direct the representatives of the different States of the Union to assemble in Musical Hall, of this city, on the 1st day of Feb. next, then and there to make such alterations in the existing laws of the Union as may ameliorate the evils under which the country is laboring, and thereby cause confidence to exist, both at home and abroad, in our stability and integrity.

NORTON I, Emperor of the United States.”

The announcement was first reprinted for humorous effect by the editor of the San Francisco Bulletin. Norton would later add “Protector of Mexico” to this title. Thus commenced his unprecedented and whimsical twenty-one-year “reign” over America.

In accordance with his self-appointed role of emperor, Norton issued numerous decrees on matters of the state. After assuming absolute control over the country, he saw no further need for a legislature, and on October 12, 1859, he issued a decree that formally “dissolved” the United States Congress. In the decree, Norton observed:

“…fraud and corruption prevent a fair and proper expression of the public voice; that open violation of the laws are constantly occurring, caused by mobs, parties, factions and undue influence of political sects; that the citizen has not that protection of person and property which he is entitled.”

Now we don’t have Emperor Norton anymore. He was a really like able kind of guy who was well dressed, usually. The San Francisco Board of Supervisors even replaced his tattered uniform given to him by officers at the Presidio. He would eat free in local restaurants after which the restaurants would post plaques that said, “by Appointment to his Imperial Majesty, Emperor Norton I of the United States.”

It’s good to be the Emperor, eh? So who’s this Duke of Aüsland? Well, that would be me. My Father was able to trace back our family’s genealogy to the 1200’s and it turns out we come from a royal family connected with one of the Duke’s of Prussia. We even had a Prussian provence named after us. So that makes me royalty. So where is Aüsland? Well that’s the closest translation to “outside lands” I could find which refers to the Sunset District. Being royalty in the Sunset district is a bit of an oxymoron so I’ve got my first step towards being the next Emperor Norton. I’m also one of the few people from a family that is the original owner of the house I live in.

I’m sure Duke wouldn’t be my proper title, but me being a bit pompous like Norton, I’ll stick with Duke since that’s where we came from, besides, my friend Al has already claimed to be the successor to Norton by proclaiming himself Emperor Al and I don’t want to hackle his feather and become cause an insurgency. So I Eric, Duke of Aüsland have a few royal proclamations to make for my new Duchy:

Thank you my loyal subjects. Have a good day!