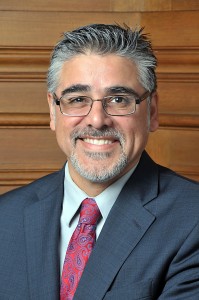 Yesterday I had a chance to meet with Supervisor John Avalos at a campaign meeting with the members of the Sunset District. I have to say that while he, like the majority of others who are running for Mayor wasn’t born and raised in San Francisco, but I do have to admit he connected with the people because his district, The Excelsior isn’t much different than the Sunset.

The evening started off good when after I walked in I was accosted by Andy Wernette, Twitter’s own Terrapin_SF. Ah yes, the bloggers are here. I got introduced to Tom of Ocean Beach Bulletin, Greg from N-Judah Chronicles and Andy’s wife @Michfit. While we attacked the perils of blogging and how much google’s adsense sucked Supervisor Avalos was wandering around schmoozing the crowd. There is always a bit of game playing when you deal with politics in public, but I have to admit that John didn’t make you feel like you were being played. He made you feel like he was one of us.

The best part about the evening is that I receive emails daily from people running for Mayor who offer you a chance to come out and have coffee with them while they tell you how we’re the greatest city and they’re going to make it better. Yadda, yadda, yadda. Supervisor Avalos invited the Sunset District out for beer and pizza and he picked up the tab. John, you know the working class Sunset District I have to say. While pizza and beer are cheap, coffee is cheaper. John Avalos kicked it up a notch by feeding the huddled masses at The Pizza Place which is in my opinion the best pizza place in the Sunset.

Supervisor Avalos gave a speech on the points he wanted to make of what he would do as Mayor. He is a progressive with his eyes on preserving the ecology of San Francisco favoring grass and nature over concrete and astroturf. A rather humorous point was met during his speech when he mentioned high taxes for properties valued at over $5 million dollars which brought about a boo from one person who then yelled taxation is Communism! OK guy, go back and take your political science course again and prove to me that you passed, then I’ll let you vote. John’s speech wasn’t long, but he got to the point quickly. I was lucky enough afterwards to introduce myself and get to pull him outside to talk privately for a few minutes. 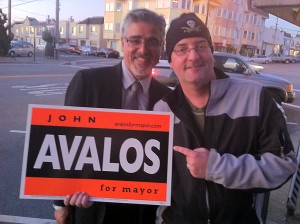 I’ve got to say that John is not a blow dried, hollywood style political figure. I told him my story and we talk about raising kids in San Francisco [which he thinks the schools need to do a better job of teaching]. He really did seem like one of us. I lived in the Excelsior for 6 years and it was a great place to live at the time. I’m glad to be back in the Sunset though and it was good to hear that we had a lot in common and John had an interest in looking after all of San Francisco, unlike some other Mayoral candidates who will go unnamed at this time.

John Avalos for Mayor. I think he is someone to keep an eye on right now.