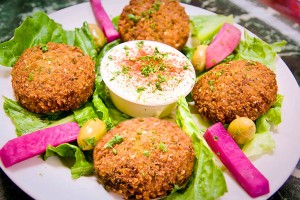 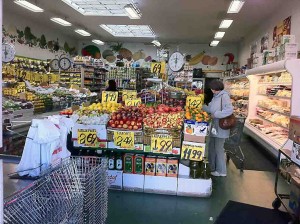 If you live in San Francisco you learn quickly that big chain produce needs a major overhaul. Thanks to my wife who gives me a kick in the head everyone once in awhile she got us to go into some of the local produce marts in San Francisco. I’m going to just talk about one, but they’re in every part of the city and the best thing is that not only is the produce fresh, but it’s cheap.

My wife, hereby referred to as wife, one day suggested we pull over and check out the Parkside Farmers Market. It’s at 16th and Taraval. I figured we didn’t have anything else to do so why not. We’ve traveled into a fair amount of stores that we wouldn’t have normally gone into just to see if we were missing anything. This place was pretty cool. I learned a lot from our trip in there.

The Parkside Farmer’s Market has in addition to produce a lot of rarely seen Mediterranian fare, Russian fare and some Asian fare [Irving street is better for Asian fare]. For those of you familiar with a candy called Aplets and Cotlets, they actually come from a candy called Turkish Delights. If you like them, then you need to go here as they are better and cheaper. You can also find lavash bread which is used in making wraps and shawarmas and pita bread and god knows how many types of feta cheese.

Then as you travel down the aisles you’ll find odd spices and grains that I had no idea what they were, but the people working there had no problem explaining to me how to use them. This was one of the places that turned me on to cacahuates, those Mexican candy coated peanuts dusted with chili powder. I learned about pickled turnips and how actually while the name doesn’t sound so good they’re pretty tasty.

Now wife is a stickler for fresh produce since I brought her out here from back east. When she sends me out to the store for produce I receive proper instructions on how to check if the produce I’d getting is fresh. This is a big point when it comes to cucumbers since it’s a food our daughter loves. I have learned that you have to squeeze the cucumbers to make sure they’re good and hard. A cucumber that isn’t is kind of squishy when you eat it and you don’t get the crunch. So I walk in and head to the cucumbers, specifically the smaller persian cucumbers and pick one up and start squeezing it. As I’m standing there squeeze the cucumber I suddenly hear a woman’s voice, can I help you? This is one of those points where you realize that you’re standing there squeezing a cucumber when a woman walks up and you start hearing this 70’s waka-waka music [Let’s Get it On, by Marvin Gaye if you need some help] in your head and think you’re in a really bad porn movie. I replied, no just checking that the cucumbers were fresh. To which I received in reply, our cucumbers are fresh and hard. No need to worry. OK, cue the waka-waka music again. [I’ve been really tryin’, baby. Tryin’ to hold back this feelin’ for so long]

I was able to shake off the fact that my mind was telling me that Larry Flynt was in charge of directing this portion of my life for a minute and got to continue shopping. Persian cucumbers, like regular cucumbers are best when they are fresh and hard, all jokes aside. I bought ten of them for about $1.69. I also picked up some of the finest English peas at $1.29/lb that were huge and also fresh. The Parkside Farmers Market only takes credit cards if you are buying more than $10 and it’s been hard for us to reach that amount sometimes.

If you get a chance to drive out to the Sunset definitely check this place out and make sure that even though it’s a small store to take your time to look up and down. You’ll be surprised at some of the things you’ll run across….and now I have to go wash out my brain with soap.