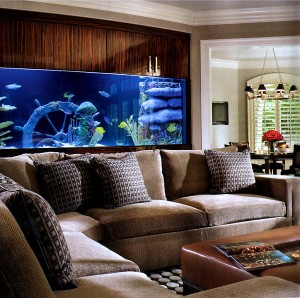 I was looking back in time yesterday when I turned on the lights of my old sturdy 55 gallon fish tank. The fish had finally all died off after close to 15 years and there were just plants in the tank that didn’t need too much light so I had left the light off to save a bit of money [note, even if I left the lights on it would only cost 11¢/day] and I started to wonder where all the aquarium people had gone to?

Granted, I’ll have to take a step back in time to the 80’s and 90’s when I was involved with the San Francisco Aquarium Society. I wasn’t just involved, but I was the President for four years and on the Board of Directors for eight. The original story is linked above. Back then when I got involved with the SFAS, it when from a casual 50 members which we might get 20 to show up to over 500 members and we would be able to pack the old auditorium at the Academy of Sciences. I became known for being a fish geek. I would get calls from newspapers and local stations would have me be on a show to talk about the popularity of aquariums. I was on a trip in the 90’s to London and while walking around the London Aquarium I asked one of the workers about one of the tank set ups and after a couple of minutes was recognized and got the full behind the scenes tour of the aquarium [it’s good to be the fish geek].

Back then there were loads of aquarium stores around the city some small some huge [R.I.P. Nippon Aquarium] and you could find fish from all over the world available to you. The aquarium clubs had all the interesting fish that you’d never see anywhere else. In addition to the SFAS, there was also the Pacific Coast Cichlid Association, the Bay Area Killifish Association and the just started Bay Area Aquatic Plant Association. They’re all still around, but they aren’t as big a pull as they used to be. 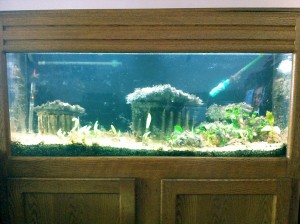 Back then we had the true fish geeks who would have home setups that would rival some public aquariums. They would breed fish, sometimes producing strains that you hadn’t seen in the hobby. Many of these people were breeding fish that had come from collections years ago of fish that were endangered [I’ve seen more Devil’s Hole Pupfish bred in home tanks than there are in the Death Valley]. Those of us who bred fish back then could bring some into the meetings and easily leave with $100 in our pocket to spend over the weekend. My goal back then was when I retired I would breed fish and sell them at the club meetings to supplement my income. I had a friend who was importing plants and selling them to the stores around the Bay Area while he was living out of his car for awhile. He built a nice nest egg for himself and I thought I would too.

Now, that’s not so much the case. Fish I could have gotten $20-$30 for a pair are now selling for $5 for three pairs at some club meetings. The public shows such as the SFAS show at Tanforan every year is gone. It seems that people don’t think about home aquariums as much anymore. They’re easier to take care of than cats and dogs. True, they won’t curl up on your lap [unless you keep eels in a tank next to your bed. True story], but they do have personalities and a nice lush tank has been shown to lower blood pressure and give people well, warm fuzzy feelings. You can get into it as much as you want. You can start with a small 10 gallon tank and then move up to home installation if you get really into it.  The SFAS Home Shows were where people got to show off what they did with their tanks and gave the rest of us ideas to build on. There were a few people who always tried to out do everyone else. One friend who passed on had a 250 gallon coffee table with small sharks swimming around [no lasers on the sharks though].

I strongly recommend people try out aquariums at least once to see if they like them. The aquarium fish trade could use a boost and it would be great to bring it back in San Francisco.