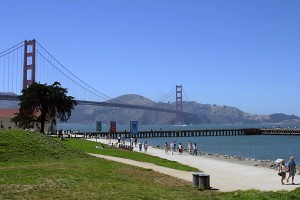 Ten years can seem like a long time or a short time depending on how you look at it. A little over ten years ago Crissy Field was a dump. It was only good for driving to on the 4th of July to watch the fireworks. The rest of the year it was pretty much seen as a dumping ground for you name it. Things have changed and this month marks the ten year anniversary of the restoration of Crissy Field. I’m not sure if Crissy Field ever looked like it does today, but this is definitely a change for the better.

I never had a reason to go to Crissy Field for the above mentioned reasons, but I was talked into it once by some friends who were going down to watch the fireworks on the 4th of July. We all huddled together in the back of a pick up truck drinking beer watching the fireworks and there were a few yee haws thrown in with the oohs and awws. The place was pretty much dirt back then. It wasn’t pretty and that’s why you only went there at night. After the restoration my wife and I decided to take a drive out there one morning to check it out. I doubt the word restoration is fitting enough for what they did. Originally, Crissy Field was an air field for the Presidio Army Base that closed in 1974. Now it’s back to looking like the salt marsh it was that was home to the Ohlone and served as a landing spot for Spanish, Russian and English traders and explorers.

Today Crissy Field is marked by the Warming Hut on the west end which is where you’ll find most of the people and the Crissy Field Center on the east end. Both spots offer food and touristy stuff to buy. The wetlands have been rebuilt and it’s a great place to take a walk and explore on a sunny day. Granted, this is San Francisco so you’ll have to keep your fingers crossed for that sunny day on the bay, but when it is sunny you’ll appreciate it.

I was there again a couple of months ago and the grass is still green and growing nicely. I noticed that there was a group of people collected next to the warming hut learning about crab fishing and they had their crab nets all set to go out on the rickety pier to cast them off and catch some crab. The pier itself is lined with a few grizzled, tough looking fisherman casting their long lines to try and haul in some of the bay’s catch of the day. There’s usually a pack of cigarettes and a flask beside them because that’s what you do when you go fishing I’ve been told. Then as you travel back off the pier you’ll have to watch out for the joggers and bicyclists that travel the paths. Follow the path off to the east and take a trip to the rebuilt salt marsh at the east end. You’ll have lots of wildlife to see here with herons and egrets dropping in regularly. If you’ve timed it right you might even see some dolphins showing off for you in the Bay. While you’re there stop by the Crissy Field Center to have a snack and learn more about the history of the place.

The Presidio Trust is now working on further incorporating Crissy Field with Presidio now that it is no long an army base and I have to tell you that right now you’ve got to drive through a bit ugliness to get to the beauty. I’m hoping they are able to make some quick work out of it because Crissy Field is a place you need to take a trip to every once in awhile. It’s windy, but not as windy as Ocean Beach. You get great views of the Marin Headlands, Alcatraz and Downtown San Francisco. It’s also one of the best places to watch the sun rise in San Francisco.