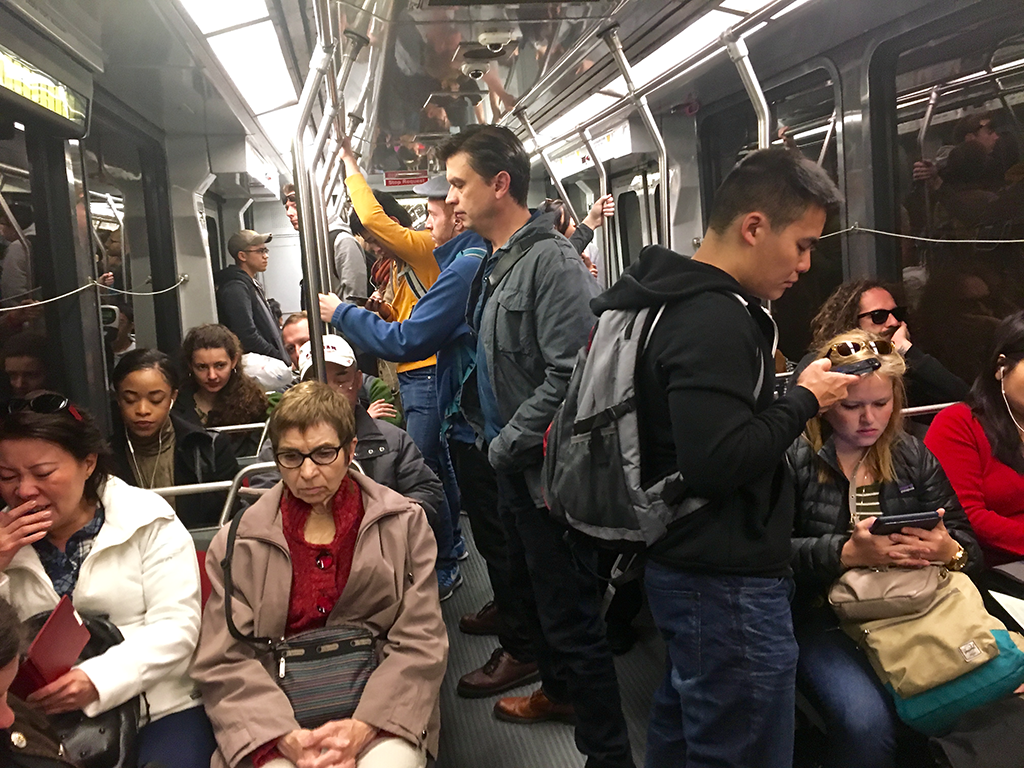 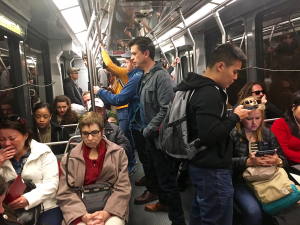 Having been encapsulated in my car for the past three years and not really having to walk the streets of the mid-market area it was a bit of a shock at first.While there are tech companies galore in the area, most are within a few feet of the metro station and the people who work there have little interaction with the locals.

I have a two block walk from Van Ness Station down to 11th and Howard and it’s an interesting walk depending on which side of the street you’re on. But before I digress, let’s start from the beginning. I consider myself rather lucky in that I live in the fifth house from the corner of a stop by the 48 Quintara. I can use the app Routesy to check the arrival time of the bus and thankfully it is very accurate. I can hop on and be driven up to West Portal station where I grab whatever shows up and take that four stops to Van Ness where I can get to work in 35 minutes. Considering most techies consider the Sunset District to be too far away I think that’s a pretty short commute compared to living in say, Oakland.

That being said, when I get off it’s a whole different story. There is a noticeable difference between the left side and the right side of the street as I walk to work. Both are dirty, but the right side is definitely more on the smelly side. On the left side I start off walking by Uber, Square and a couple of other companies and while I don’t have proof I can’t help but think they’re part of the reason it’s not as smelly. There are security guards stationed at the entrance of all the buildings and garages and they’re all big and stern looking gentlemen, but when I walk by they sort of lose that street face probably because they know I’ve got better things to do than mess with them. There’s still a ton of old dried up gum on the sidewalk as I get to 11th and Mission, but it’s missing from the block were Uber and Square reside.

Once I hit Mission things begin to change. There’s a taco truck that I mentioned previously that was chasing away a homeless person who was trying to hide behind it to take a dump. The amount of trash increases here as well as people who obviously look much older than they really are. I have to walk past people having arguments with no one else in side who’s faces show that while they look old and haggard they aren’t as old as they look. Meth comes to mind, but it could easily be years of alcohol abuse as well. If I’m not asked by something slurring their words hunched over for a cigarette even though I’m not smoking it’s considered a good day. As I reach Howard street there’s a bus stop which looks like it kind of doubles as a rest room. In the mornings there are lots of young people who go to a couple of places for mentally disabled people that I feel sorry for because they have to see the ugly soft white underbelly of the city. Most of the people on the streets look angry. If I had to live there I’d probably look angry too. It’s not a very inviting place, yet all the of the tech and tech related companies I pass by have these unadorned fronts with large glass windows showing off their beautiful insides. I can totally relate to people who have to walk by these places daily on the outside looking in. It just feels a bit grim to me.

I mentioned before that there are lots of car repair shops, but what I didn’t mention is that they’re all high end car repair shops. You walk by garages that are dingy on the outside, but when you walk by the opening they’re immaculate Mercedes, BMW, Audi and even higher end repair shops. All the cars look like they just came out of a car wash even if they’ve been in a wreak.

When it’s time for me to go home it’s been a bit warm lately in the evenings and so I walk up the right side of the street to stay out of the sun. This is a whole different area even though it’s just across the street. There are lots of support buildings for those in need and unfortunately it tends to show the downside of those who are less fortunate. There are makeshift tents, people passed out against buildings and smell of sewer plant is highly evident. Why it doesn’t cross the street is beyond me.

There’s a Salvation Army store that takes up a sizable chunk between Mission and Market that I assume is attracting people who go through the stuff the SA can’t use. Having to walk past old dried out gum on the other side of the street isn’t so bad in comparison to having to step over puddles of urine and feces on the other side of the street. I was walking up to Market the other day behind a couple of kids who might have been in their early 20’s chugging a 40oz of MGD when the guy says, I gotta piss hella bad, so he just stopped in a corner and started to relieve himself. His girlfriend noted that she had to too and dropped her pants in the bus stop and took care of business both of them ignoring that I was walking by or that there was an elderly woman sitting waiting for the bus.

Once I make it back to Van Ness Station things seem safe again, not that I’ve been harassed by anyone on the walk back, but still, it’s been an eye opening experience.

Next: Back To Work: Tech Bros, The Real Story.