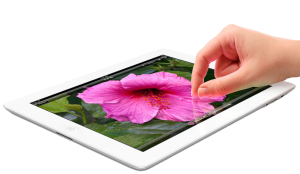 March 7th was the magical day where Apple surprised us by releasing the New iPad . Not much surprise there except for the missing 3. We had been hearing all the rumors for months and our friends down south in Cupertino gave the Moscone Center attendants the buzz they were craving.

The thing that impressed me the most was the beginning when Tim Cook came out. If you closed your eyes, he was definitely channeling Steve Jobs. I suspect he had been groomed and prepped to not be a jarring replacement to the wonder that was Steve Jobs. While the changes weren’t super revolutionary, they were as Apple is calling it, resolutionary. As predicted the New iPad has the retina display. It’s got the dual core A5x chip with quad-core graphics which for the non-geeks out there means it’s faster and the graphics have a big wow factor now.

I’m not going to focus on all the new whiz bang stuff that it does, but focus on how this device will change things a bit. One of the things that people aren’t really paying too much attention to is that the New iPad has more memory and graphics capabilities than an Xbox 360 or Playstation 3. To me this means that it now is not just going after the tablet market, but also after the game station market. Now it may cost more than both of those, but the games are cheaper, it does more than just games, is portable and gives you more resolution than a 42″ HD TV.

The new 5MP camera is pretty adequate. I know my iPhone’s is pretty good, but this one is a better 5MP camera than mine. Photographers will have to get used to holding a bigger camera in their hands, but I’m wondering how many of these people remember the old Polaroid instamatics. Because they now have a 5MP camera on the New iPad they had to bring iPhoto to the New iPad. This isn’t like your regular iPhoto, but adds in a lot more features making it act closer to photoshop. The ease in adjusting photographs is pretty slick and when you’re finished you can assemble them into a photo journal that you can share with your friends. That’s pretty slick and I think I will drop the $4.99 on it to try it out. They didn’t include a flash with the New iPad, but I actually never use the flash on my iPhone. If I’m a darker environment I usually turn on the HDR and get better pictures. If you click on the photo up above you’ll see that the retina display really makes your photos look like they’re popping out of a page of Architectural Digest. This might indeed be a game changer for the photo crowd since every photo you take is uploaded to the cloud which makes your pictures instantly saved and you can share them immediately through a variety of sources, FaceBook and Twitter of course being first on the list.

If you like video they’ve upgraded the camera to shoot 1080p and introduced an anti-shake video that in the Apple produced demo proved to do some good work. I’m sure they enlisted professional cameramen to make the demo, but you can still get pretty close I’m sure. Since they have a 1080p camera now they of course had to update iMovie. They’ve added in theatrical trailers now like the desktop version has which is fun and again might make a few new Cecil B. DeMille’s out of amateurs. Putting full HD recording into the hands of the masses is a real game changer to me in that we’ll expect more from professionals.

Garageband got an update as well and my daughter has been playing with it constantly since the update. The changes are so much a gee wow with the addition of smart strings so you can add orchestra strings to your music [which sound quite good actually], but there is a new feature called Jam Session which looks like a lot of fun. With these new virtual instruments there are people who are going to be learning how to make music without having formal training. I bet if I did a search I could find people who are now teaching people how to play music on an iPad. What’s cool about Jam Session is that you can have four iPads playing along together with one of them that’s playing recording all four iPads. That’s a pretty cool thing and I’m sure there will be lots of youtube videos coming out shortly after the New iPad is available March 16th.

They’ve also updated their iWork set of programs to take advantage of the retina display which makes sense so now people who are creating eBooks will be able to be on the same page so to speak as oh say, Architectural Digest. So what in my twisted mind does all this mean?

The game demo’s were impressive. The drawing demo was impressive, iPhoto and it’s editing were impressive. Overall I think that this will move some people away from gaming systems and to the iPad, but I think they’ll need to up the speaker system or come up with some good wireless speakers to send the sound to. The camera will give people who want to make videos an easier time of doing it, so expect to see more independent short films to start coming out. Then there’s the simple fact that what most people need to do on a desktop computer is read email, surf the web, watch a few videos and play a few games then they may actually not need a desktop computer as I said in an earlier article. When I’ve opened up a photo on my iMac that I’ve taken on my iPhone it is HUGE because my iPhone like the New iPad has 264 pixels per inch unlike my desktop that has 72 pixels per inch.

Yes, I want one, but I think I’ll wait a little while. Tim Cook ended his keynote by telling us to expect more improvements in 2012 so the fact that this is the New iPad and not an iPad 3 leads me to believe they are coming out with other models over the course of the year. I don’t want to be the guy that buys the New iPad a couple of days before something new comes out that does more. I think I’ll upgrade my Apple TV first. It’ll cost me less money.