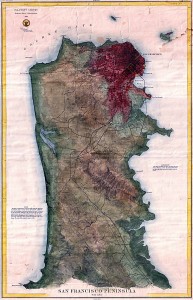 As you enter Daly City their slogan is, Gateway to the Peninsula! That’s true if you’re driving north, but if you’re driving south once you leave San Francisco you’re actually on an isthmus [pronounced like isthmus be my lucky day.] A peninsula is an area of land with water on three sides connected to the main land by an isthmus. An isthmus is a narrow strip of land connecting two larger land areas usually with waterforms on either side. So technically we should all be saying when leaving the city that we’re driving down to the isthmus.

I’m not sure this idea will ever catch on and I’m surprised none of my teacher in school when we got to geography never pointed this mistake out to us. I suppose they just considered the whole patch of land before you hit San Jose a peninsula would be true, but that would then make Daly City’s slogan false.

See what happens when I let my mind wander. Isthmus be one of the stranger stories I’ve ever written.