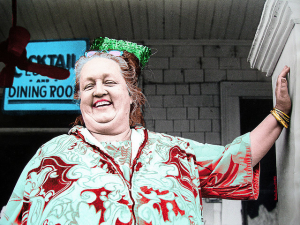 The what?!?! Queen of the “Earmuffs“? What the hell is that supposed to mean? Well, today it turns out San Francisco has lost another one of it’s colorful characters. Following in the footsteps of Henry Africa, Juanita Musson passed away a few days ago. I had never heard of her before, but when I read some of the comments about her I wish I would have. She ran quite a few restaurants around the Bay Area, but was best known for Juanita’s Galley in Sausalito. I think that she had several restaurants around the Bay Area with the same name, but she made her name closer to San Francisco.

She was called, the Drinking Man’s Julia Child and that’s what caught my attention. She was known as a brawler, a women would could make a sailor blush with her foul mouth before she drank him under the table. She ran restaurants that in addition to the diners there would be dogs, cats, owls, monkeys, goats and pigs that would walk around her restaurants. There were no to go bags at her places. If you didn’t finish your huge portion you had to bring your own bag to bring it home in or feed the rest to the animals that were running around her place.

Juanita was a big woman. She weighed in at around 300 lbs and her huge endowment is where the earmuff joke comes from. She apparently had a penchant for sneaking up on customers, male of course, and grabbing her large pendulous breasts [she was braless before it was chic] and slapping them on either sides of men’s heads. If Emperor Norton was born a bit later these too would have been a hot item.

Juanita was a bit of a drunk, but not like the staggering through the Tenderloin kind of drunk. She was a fun drunk it sounds like. In Sonoma where she died the Sonoma News had the following to say:

Famous for her enormous slabs of prime rib, one order of a Juanita meal could typically feed a table. But diners quickly learned that if you didn’t clean your plate you couldn’t take it home, although you could slip some food unnoticed into a purse or pass a piece of excess beef to the dog that often wandered through the dining room.

Juanita kept a bedroom just off the lobby of the rundown hotel and arriving guests frequently found her fast asleep, her sizeable bulk covered in a flowing muumuu, her door open to the passing parade, her bed surrounded by an enormous collection of dolls.

If you knew Juanita and tried to sneak past her open bedroom door, she invariably sensed your presence and would call out in a shrill, commanding voice, “Hey honey, come in here NOW, and give Juanita a HUG!”

She was fearlessly and completely herself, there was no filter on her mouth or her emotions and she didn’t recognize a variety of conventional boundaries. Her “ear muff” prank consisted of sneaking up behind an unsuspecting diner and swinging each muumuu-wrapped breast up against the victim’s ears. Then she would cackle loudly and leave.

Famous Dallas Cowboys defensive end Ed “Too Tall” Jones got an earmuff and so, almost, did this writer’s 75-year-old father.

I guess getting an earmuff from Juanita was kind of like a badge of honor for some. Keep in mind that this hard living foul mouthed restauranteur who would have chewed up Anthony Bourdain and spit him out lived to the ripe old age of 87. I bet she smoked too. 😉