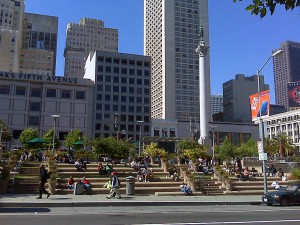 I had to take a trip down to Union Square yesterday which means this should officially be the next post for the 49 mile scenic trip around San Francisco, but it’s going to encompass a little bit more. When you get off the metro at Powell Street station and return to the land of living you’re confronted with something much different than your quiet little neighborhood where you started…PEOPLE!

More accurately defined as members of the species, Homo touristus, or Tourists. You can tell them from their glazed over look trying to take in everything around them and understand how you can have a really crappy tourist shop next to a very high end fashion outlet or they’re just filling up the space to try and get a ride on our famous cable cars which have their turnaround at the end of their line at Powell and Market. If you’ve never seen a cable car turnaround it’s kind of impressive. The cable car drives onto a large turntable and unhooks from the underground cable. Then two guys literally turn it around so it can head outbound with all the passengers on the new track.

The people who work in and around this area you can tell because their the one’s who are darting through the zombie tourists much like a quarterback doing an end run. When you get to a stop light you more collect into a denser crowd until the light changes and you have to navigate through the horde coming at you from the opposite direction.

Finally after a few blocks you hit Union Square where everything opens up, sort of. I was there around lunch time so it was expected to be crowded. It was the first warm summery day that we’ve had in awhile so there were plenty of short skirts out enjoying the weather with in term brought out more guys to ogle them hoping for a quick breeze to give the skirts some lift. There was a band playing, since it was lunch time which attracted even more people, but at least you had some room to breathe.

This made me wonder how Union Square came to be so I did a little research. It turns out that it was set aside in 1850 by the first American Mayor of San Francisco, John Geary to hold pro-Union rallies. Not the unions you’re thinking of but the pre-Civil war Union vs. Confederates. In 1903 a pillar dedicated to Admiral Dewey’s victory at the Battle of Manila Bay was put in place. Then Mayor Willie Brown, closed the square in 2000 for renovation so that it didn’t look like some kind of Russian industrial playground, but more park-like. Reopening in 2002 it became the unofficial heart of San Francisco where you will readily find art shows, free bands and I believe they still have a farmer’s market there, but I couldn’t find any info on it.

The real reason people come to this area is for retail therapy. This is where you come to shop. Since I grew up in the Sunset District we’d usually go to the Stonestown Mall or Serramonte rather than downtown, but my Grandmother always loved going downtown. I think because it made her feel like an upper crust society woman [my Grandmother was the executive secretary for the Women’s City Club, a place where women whose children had left the nest went to drink tea and eat watercress sandwiches until their husband’s came home from work.]

At Union Square you’ll find Macy’s, Tiffany’s, Saks Fifth Avenue and all the other, if you have to ask the price, you can’t afford it type stores intermixed with the Sketchers and Diesel chains for the younger crowd who don’t ask the price, but just ask their parents to pay the bill. Side note, I once actually paid $75 for a Diesel belt that has held up to all the wear and tear over the 10 years I’ve had it, but I won’t be making any purchases like that for at least another 10 years. I do like to window shop at least and you can do that too for free.

You’ll also find all the upper crust hotels here such as the St. Francis with Beefeater dressed doorman, the Grand Hyatt and Four Seasons along with many other pricey, but luxury hotels. What’s a hotel without places to eat? One of the things I never realized before was just how many steak houses and hof brau type restaurants were in the area. You get plenty of food at not too expensive prices and the surrounds are, acceptable, not suit and tie luxury, but you could do a lot worse. The best known of these places is Lefty O’Douls. A place I and many other denizens of San Francisco history have been found here. Let’s just say if you want to save your money, go to Lefty’s. It’s probably the cheapest spot on the square and the best bang for your buck. Lefty’s deserves its own posting so I’ll leave it at that.

If you haven’t been to Union Square you should go to take in a sense of San Francisco. Now I want to go to Lefty’s.