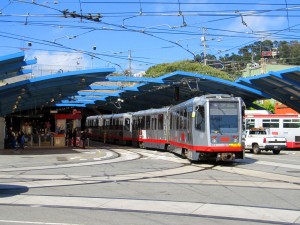 I had to take a trip downtown the other day and started thinking about some of the jobs I used to have down in the financial district before I had my iPhone. Mobile devices don’t work in the tunnel once the train starts in past West Portal station. They barely even work inside the open air station for some reason, but more importantly it can take you 20-30 minutes to get from West Portal to the Embarcadero and you don’t have access to the outside world from the inside.

You can’t make phone calls which some people appreciate because of the thick concrete and you can barely get 3G/4G service at a couple of stations and that’s only for about a minute. I think it’s time that SFMTA installed Wi-FI or at least allow 3G/4G access while in the tunnel. There are a couple of reasons for this idea that I like.

First, it eliminates the need for big bulky newspapers. I always hated people sitting next to me stretching out their hands reading the morning paper on a crowded streetcar or the occasional elbow as a person flips a page of a book they’re reading. With a mobile device you have a much better confined  reading space that fits with a crowded streetcar better than paper.

The second is that some people like to use social media apps or read their email or stay connected to their place of work in case something comes up on the way in. It’s really sad to me that I am more connected hopping a 48 Quintara to the Mission than I am on a streetcar going to the financial district.

There’s lots of things you can do to occupy yourself with a mobile device to kill the time, especially when the driver tells you there’s a delay and you’ll have to wait. Most of the apps though require a hook up to the internet to get you the information you was to use. Happy passengers aren’t grumpy and crazy. If I’m stuck by a delay and find out that after 45 minutes on the train that my wife was in a car accident or something happened to my daughter that would be bad, very bad.

BART understands this and I wrote about this previously. I hoped BART one day at Embarcadero and happened to notice as I hit the tunnel under the bay, that I could hook up for free to BART’s wi-fi service. The trip was almost an hour and the entire way I was surfing the web, sending emails, made a couple of calls just fine. I even had a cell phone signal under the bay. This leads to more productivity for some people or just happier riders for the less productive who just want to hop on in their trip from one part of town to another and watch a TV show on Hulu or Netflix. It would give them a chance to tune out the crazies or people who talk too loud to the person sitting next to them. Now we just have to figure out who’s job we would have to cut to make that happen. Maybe a marketing director or two since you wouldn’t need them if they made the trip more pleasant.