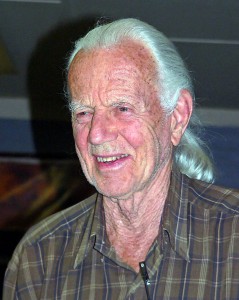 The Dobsonian telescope named after it’s inventor, John Dobson brought the heavens to a great number of people. It was fairly cheap to make, but gave you the ability to see things in the sky that most store bought telescopes would never let you see. The first time I got to see Saturn for myself was through a Dobsonian telescope and Jupiter looked huge and I could even make out more than the four moons you normally can see.

I’m not sure why, but John popped into my head over the weekend. I haven’t seen him in years and figured he had probably died. I think I was 10 when I last saw him and my parents and I took a class from him to make our own Dobsonian telescope. We met him one night outside the California Academy of Sciences with the group the San Francisco Sidewalk Astronomers. They had brought telescopes out and had them set up and were inviting people to have a look. They were really quite simple reflector type telescopes. They had a mirror at the end of a big long tube which focused the sky’s image on to what he referred to in the class as the spider which had a mirror that reflected what it saw into the viewing aperture.

My Dad had always been into astronomy and when he asked John were he bought the telescope [this one was called the Zebra and painted with psychedelic zebra stripes] John told my Dad that he made it and offered classes on how to do it and you’d end up with one when you finished. You had to do all the work yourself, but I think it only cost around $50 at the time and my Dad was sold. The first couple of classes were just discussion and then we were given two round portholes and grit and told to get to work. 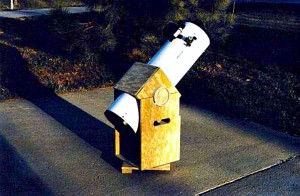 The process of making the big mirror for the telescope consisted of mixing some grit with water and putting it between the two portholes and rotating them in small circles. I think most of our neighbors thought we were crazy as my Dad on weekends would take the portholes out in the driveway and he and I would sit there for hours grinding away at the glass. Since my Dad only had weekends to work on the mirror and John always focused on perfection in the grinding we never finished the mirror, but we did get it as far as the pitch lap which I’m still not sure what part that plays in the mirror, but I remember it was the last step before your porthole became a mirror for your telescope. That and the tube for our 12″ telescope sat in our house for years until my astronomical friend Patty took them off our hands a few years ago.

One of the interesting things about John was that he wasn’t a child of the 60’s although he totally fit the bill when you saw him. He was actually born in 1915 [turns out he’s a Virgo like me] in Bejing, China which made him the same age as my Dad. He had a ponytail and probably still does. I don’t know how old the picture I found of him is, but that’s how I remember him. He, unlike my Dad is still alive today and still talking about Astronomy at the ripe old age of 96. I bet he still gets on his knees and grinds portholes into mirrors to this day. The San Francisco Sidewalk Astronomers [which John helped found] and their urban guerrilla astronomy are still thriving today. You can find them showing up around the city on clear nights holding star parties to entertain and teach the people passing by.

Because of John, I took up a big interest in science and still have a love for it today. I actually even worked at the Planetarium at the California Academy of Sciences for a while as a teenager because I though the planetarium projector was just so cool and the fact that it was built out of spare parts during WWII gave it a kind of Dobsonian feel to it. John doesn’t have his own website, but he’s got a Wikipedia page and he’s mentioned frequently on the San Francisco Sidewalk Astronomers website. They have a calendar, but I didn’t see any upcoming star parties listed. You can also follow them on Twitter where you’ll probably here about their next star party. Check them out and you’ll be able to check out the stars for yourself one day.