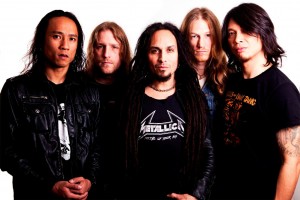 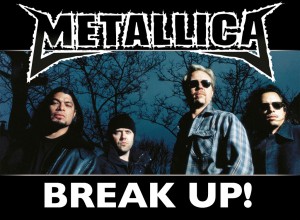 I should have realized that it was posted on April 1st, but I didn’t take notice when I read an article on Metallica breaking up. I got punked. Metallica is one of the biggest metal bands and for them to break up would be huge. Sure, they don’t please everyone anymore. I still like the earlier albums, but then again, I used to roadie for them back in their club days.

No one has confirmed it was an April Fool’s joke, but I’m pretty certain at this point it is. I haven’t had any contact with any of the guys in years so I can’t say for sure, but I’m pretty sure it’s a joke. The actual story from ultimate-guitar.com stated the following:

Despite the recent talks of a new album and 3D movie, Metallica’s James Hetfield has officially announced that Metallica, the world’s biggest heavy metal band, has called it quits.

In an official statement from Hetfield on behalf of the entire group, Hetfield revealed the factors that contributed to this surprising decision: “We’ve been doing this for 30 years. At a certain point, we all realized we wanted to explore new territories musically. The project with Lou Reed [”Lulu”] seemed to awaken a desire to move onto new musical horizons. It’s come to that time; we can’t be Metallica anymore. But fear not, you’ll be hearing new music from each of us in the future.”

Plans for said musical projects from each band member remain speculative; however, each member of Metallica has announced tentative plans for what’s in store for them musically in the coming months.

Hetfield, admittedly inspired by his onstage reunion with former Metallica guitarist, Dave Mustaine, has expressed desire to start a new group with the Megadeth frontman. Commenting on this, Dave Mustaine says, “I’ll have to think about it.” No word yet on who would fill in the bass and drum slots. Hetfield has admitted to having a strong respect for keyboardist **** from Children of Bodom, which could be a possibility.

Lars Ulrich, when asked what he plans to do, expressed desires to work alongside Marylin Manson. “I’ve been drawn more to the artistic side of heavy metal – with a guy like Manson, I think I’ll be satisfied artistically. We’ve gotten together a few times and thrown some ideas around.”

Bassist Robert Trujillo has issued some rather undiplomatic statements, calling Lars a “tool” and Hetfield a “control freak.” Trujillo plans on returning to his previous band, Suicidal Tendencies.

This news comes as a surprise to fans eager to hear the follow up to their 2008 return-to-form album, “Death Magnetic.” Although the ill-fated album with the Velvet Underground’s Lou Reed seemed to foreshadow a mid-life crisis for the metal giants.

However, Lou Reed still remains in the Metallica circle; it is rumored that Metallica lead guitarist, Kirk Hammet, will team up with Reed for a concept album that explores the dynamic range of his favorite electric guitar effect- the wah pedal. “The wah pedal is pure expression, much like Lou Reed’s voice. Everything on the album – percussion, vocals, guitars, bass – will go through a wah pedal.”

We at UG are certainly surprised to hear of this news. Metallica will always be remembered as one of the most influential metal bands of all time. This is quite the way to begin the month of April…

Now I didn’t even know they made an album with Lou Reed and after checking it out on iTunes, I have to say that would have been an better April Fool’s joke. It just proved that Lou Reed is completely tone deaf. Death Magnetic was recorded too loud to the point that the whole album is distorted. I’m not really pissed about being punked by the announcement, only feeling dumb that I didn’t catch that it was posted on April 1st.