When I’m out driving around I’ve found that I’ve started to take every quarter in change I have and put it in my jacket pocket, that way if I have to use a parking meter I know I’m covered. Sometimes though I might need to be there for a couple of hours and don’t have enough quarters on me. This happened to me today and I tried out paybyphone.com to pay for the parking.

I had to have an allergy test done which for some reason I’ve never had done in my life. The hospital I go to has parking garages, but that would have cost me around $12 for the 2 hours I was there. I found a meter and saw that you could pay by phone. I had no idea how long I would be there, but I guessed an hour and a half would be a good amount to start with. I called the number entered my credit card number and created a PIN number and then entered the code on the parking meter. I was all set. I did have to pay a 45¢ convenience fee which I didn’t like, but the company that runs this has to of course make some kind of money.

As I’m going through the allergy test which was carried out in a Pediatrician’s office [and I didn’t get a lollypop afterwards for not screaming and crying during the test!] I noticed that my time was running out so I opened up the web browser on my iPhone and found that the page was still available and had an extend button so judging from what the doctor said I figured adding another 30 minutes would work. I was then charged another 45¢ convenience fee on top of the last one. In the end I don’t have any allergies and it turned out I had to pay only $4.90 vs. the $12 it would have cost me in one of the lots. Not too shabby, but it would have only been $4 if I had the quarters on me.

When I got home I went to their website and saw that they have a mobile app for iPhones and Androids which is free. It’s much easier to use and doesn’t require a phone and is much more secure. Most meters around the city have the paybyphone.com stickers on them so if you’re going to be somewhere for a couple of hours it makes sense, or you can just keep $4 in quarters handy at all times. I did that once and frankly I didn’t like the jangling all those quarters made as I was walking around, so now I keep $2 in quarters as my maximum all of the time. Oh and if you really want to know, I don’t have any allergies. 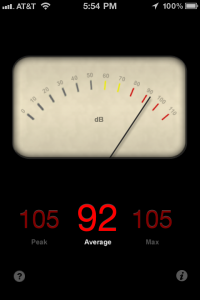