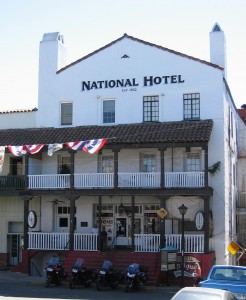 So I was seeing my doctor this morning and as I figured he wanted me to have a blood test. I go down to the lab and get called by a nurse who’s going to take my blood and she says to me, “Oh Mr. Kauschen, where does your family name come from?” I tell her it’s the name of an eastern province in Prussia. “Have you ever visited your home country?”

She obviously hasn’t looked at a map lately, but she’s sure good with needles. As I’m telling my wife this story she blurts out, “Your home country is Jackson.” I thought for a second and she’s right. You have to go back through a whole bunch of generations to find the first immigrants in my family and they’ve called Jackson, California their home since at least the beginnings of the 1800’s. It’s been awhile since I’ve been back there but Jackson is still the same. We used to go up there every summer and my best friend there was the son of the chief of police who all the teenagers called, “Bubble Butt” and he made Jackie Gleeson in Cannonball run look like a civilized Manhattan business man in comparison. They’ve come up in the world a bit lately with their Indian Casino, but it’s still Jackson.

We used to eat outside in the hot summers there and there was always a neighbor coming into the yard while we was eating with a loud, “Hey how ya’ll doin’!” usually accompanied by something grown on their farm or backyard. So yeah, I’ve got a little country in me and I’d have to agree with my wife, Jackson is my home country and I’m a Native American. I didn’t come from anywhere else, I’m an American. Friends of mine in other countries always find it strange as to the fixation of Americans of what countries their descents came from. I guess it that we have nothing better to do that try and find ways to keep us separated. For me it’s better to say I’m an American because at least I know what I am. The area my father came from was at different times Germany, Poland, Prussia and Lithuania. Who needs all that confusion just be American and be done with it.