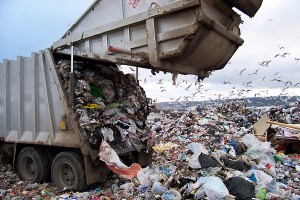 So Monday night we have to put out our garbage. Twice in the last six months for some reason they haven’t picked up our garbage. I call and they tell me that they’ll pick it up the next day. OK, fine by me, but today we had a knock on the door…

I called up Sunset Scavengers [kind of sounds like their seagulls doesn’t it?] and the woman I talked to was typing up a ticket for me to the Supervisor and she’s a nice woman, but she speaks what she’s typing and says, Didn’t pick up garbage twice in last six months, driver said there would be $20 charge next time, what the f*ck is going on here?

Well, it wasn’t the best customer service, but I have to agree with her.I think if this happens again I’ll have to ask my wife to ask the guy’s name and it’ll probably be Vinny.