The Beach Chalet occupies the top floor of the old Golden Gate Park Visitor’s center with stunning views of the ocean, great food and a microbrewery that in addition to making beer also makes a great root beer [more on that later]. I’m not sure when the actual building was constructed, but I do know that they artwork downstairs was done as part of the WPA project in the 1930’s by artist Lucien Labaudt. It spent most of its years a vacant empty shell during my youth until Gar and Lara Trupelli and Timon Malloy bought it and started to restore it sometime in the early 80’s.

The place is filled with that “outside lands” vibe that I always talk about. It’s a great place to kick back and relax while enjoying some great food. When the weather’s good I usually like to skip the Beach Chalet and go around back to the Park Chalet. Same general food, but to replace the view of the sea you get a very open area where the windows that also serve as walls can be turned and moved to open up the space to the well kept up garden area where you’ll usually find a few kids running around on the weekends. 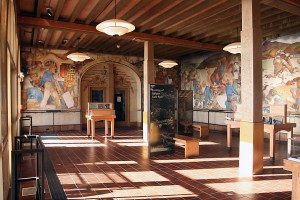 Now let’s talk about the food. The prices are in the $10-$32 range for main courses and the variance depends on what time of day you go and of course, what you get. I think the prices are pretty reasonable considering what you get. They have a range of dishes covering the beef, pork, chicken and fish departments and each one has a favorite for me. THey also have a Prime Rib Monday special that while I haven’t tried that yet, I think I’m going to have to.

For beef I have to go with the flat iron steak & frites. I’ve learned to love flat iron steak ever since Chef Bruce Hill [Zero Zero] introduced it to me at a restaurant he previously worked. It’s got a meaty flavor, but is also very tender served with a caramelized onion sauce and the frites are crispy to perfection.

For pork I have to go with their Carolina style pulled pork sandwich. I’m a sucker for pork and this is a juicy sandwich to bite into. You get a really good taste, but not overpowering flavor of the Carolina style sauce in the meat and the fried onion strings [always a favorite with me] are just icing on the cake.

Chicken is tough with me as it is in most restaurants, but they put it to good use in the west coast carbonara. The fettucine, chicken, english peas, bacon, thyme and shaved parmigiano-reggiano cheese all blend well with the sauce to create a dish that won’t leave you feeling weighed down when you finish like some pasta dishes can.

For the fish I have to go with an old standby because they do it so well and that’s their V.F.W. beer battered fish and chips. The flavor is intense, but not fishy nor overly greasy. 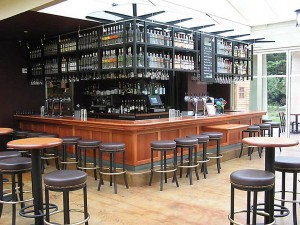 Now one thing you always have to remember when you come here is that it’s a micro brewery so you have to try the beer. They have five regulars on tap, V.F.W. Light, Presidio IPA, Riptide Red, Fleishacker Stout  & Dee’s Bitter Ale. They also have specials that pop up like their Ocean Beach Oktoberfest beer and I honestly can’t pick a favorite. They’re all good and there’s something for every beer drinker there. They offer a circle of ales where you get a small glass of each of the beers to try and compare.

Now about the root beer. Funhouse Root beer is unlike any root beer you’ll ever taste. I tell everyone who goes there that they have to try the root beer and they all say the same thing, Damn, that’s good root beer! It is and brewmaster Aron Deorsey hit the nail on the head with this one. It’s got a bit of a thicker and heavier taste than most store bought root beers and the flavor will stay with you after you’ve finished it. Best not to switch over to beer afterwards unless you like your beer tasting sweet. I wish they did sell it in stores, but unfortunately they don’t. They did used to sell what they called a growler that was basically a gallon jug they’d fill up with whatever beer or root beer you wanted and you could take it home with you. It really is that good. TRY THE ROOT BEER!

Tuesday’s and Fridays they have live music and there’s always the 3-6pm and 9pm-closing happy hours with $3, $6 & $9 drinks and appetizers Monday through Friday. Since it looks like we’ll be having some nice weather for a bit I suggest you head down to the beach and check out both the Beach and Park Chalets. 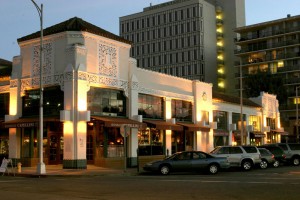