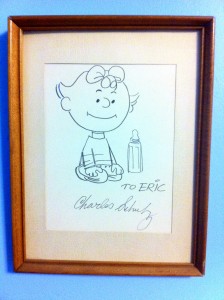 Well, he’s not really my old pal, but he was a buddy of my Dad’s and he got this for me. When my Mom died she had a few valuable things, but they didn’t mean anything to me and she specifically told me to auction them off so we’d have a nest egg to sit back on [note to self, nest eggs run out quickly when you’re unemployed].

But moving back to the story. My Dad used to work down in the Marina Districts at Jack’s Phillips 66 prior to it being broken up by anti-trust laws and turned into the Cow Hollow Motor Inn. He’d start work early and get off around 3pm and walk down to Chestnut street to the Golden Horseshoe bar were he’d get a few beers from that smooth old bartender Freddie the Fox.

My dad liked to talk to people, you know like how drunks like to talk to you when you aren’t so interested in being talked to. But this was back in the early 60’s so everyone was pretty much drunk by 3:30pm. He’s sitting next to a guy who’s sipping away at his drink and scribbling out stuff on the cocktail napkins. One thing Dad was always into was comics and cartoons. We used to lay on the bed Sunday mornings and read the comics together. That was considered quality time for him as he spent most of his days off out in the yard working away at his prized garden. So my Dad notices this guy drawing a dog. “Hey! That’s pretty good, that’s looks almost as good as Charles Schulz” says Dad. “Well, I should hope so since I’m Charles Schulz.”

It turns out that while Schulz was living in Santa Rosa he liked to come into the city and have some fun and a few drinks. Each time my Dad would talk to him and watch him draw. One day mu Dad brought in a sheet of paper from the gas station and asked Charles if he’d do a drawing for his son and this is what he got and gave to me. I think I might have been about 5-6 at the time. I might even have been at the bar as he used to bring me down and tuck me in the corner with a Shirley Temple while he was drinking and talking. Things were different back then.

So here I have the one thing of value that I’m not going to sell. I’ve been told it’s worth a bit of money and my silly side wants to put a plaque on it that says, “My Dad went to Freddy’s Golden Horseshoe and all I got was this dumb picture.” But for now I’ve decided to put it up in my daughter’s room since it makes more sense putting a picture of Sally up in a girl’s room than a boys.