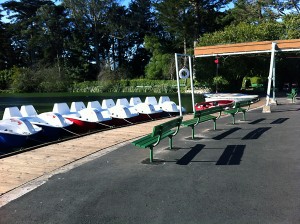 I read an article this morning on the San Francisco Citizen blog about someone committing yelp fraud by posting a review that really wasn’t a review or correct. This prompted me to take a drive over to the boat house to see how things were since the change in concessionaires. Well, pretty much it looks the same as it did before. A bit cleaner with newer boats and what appears to be a fresh coat of paint, but otherwise there wasn’t any difference.

Here’s what the yelp reviewer had to say:

What happened to the cool local people that worked there? Everyone we saw was white, which is weird for SF. We drove over from the East Bay to rent boats with my 2 kids and my mom. The kids couldn’t reach the pedals in the boat we rented. Howsthat? It’s for kids,right? After a unhappy boatride, my mom tripped on the crappy stairs in front of the boathouse. She was bleeding, the kids were crying, and no one bothered to help us. An old man sitting on a bench helped us and said the boathouse was just taken over by a New Mexico chain. We won’t be back.

Yes, if everyone was white that would be weird for SF. That’s not what I saw. What I saw were a mix of roughly 75% Chinese and 25% white people who were all out for a good old fashion morning stroll. It was also pretty clean and nice. I walked up to the paddle boats and judging from the distance between the seat and a pedals my almost 5 year old daughter could have peddled it. I doubt she would have wanted to, but Les L. of Oakland, CA got it wrong. As for the crappy stairs in front, they’re the same crappy stairs that have been there since I was a kid. Les, you apparently have a case of Keyboard Lycanthropy because you’re anonymous and no one can put a cap in your ass when you CAPS LOCK THEIR ASS.

Change in San Francisco is inevitable, but San Franciscans don’t really like change until after it happens then they love it. Remember how ugly the observation tower at the De Young museum was? Now I hear people referring to it as a gem of Golden Gate Park.

While they’ve spruced the place up a bit there’s still a lot of work that is anticipated to take another 90 days or so. The boathouse part of the boathouse is still that, the door was open and I saw a couple of boats stored in there. The menu of food has changed a bit for the better and at least you can still get the Wright’s Pink Popcorn I’ve talked about before.