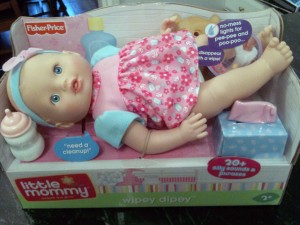 As many of you are aware, we have a daughter who is autistic so things move a bit slower. She’s coming along quite well with many things, but potty training is the last step. We’ve gotten into serious mode with potty training. There are lots of schools of thought with this from the free elimination parents who watch and then notice what’s going on and hold their kids over a bucket to eliminate and never allow diapers. That’s a bit extreme for us, so we’re taking a bit safer, albeit more expensive route.

With our therapists we have gotten her to learn to sit on the toilet for five minutes straight and moved onto five minutes straight with her pants pulled down. Now we’ve switched over to panties instead of diapers for most of the day and every 30 minutes go through the potty training routine. We’ve had only a few accidents and have managed to only get one stained chair out of it, but I think I can handle that.

A friend of ours suggested that perhaps she would get the idea more if we had a Betsey Wetsey type doll. My wife and has been looking left and right for one and they’re in the $25-$30 range. This seems a bit much for something we don’t even know if it will work. None of these dolls by the way come with a toilet to sit on. That of course, costs extra.

So wife, daughter and I are at target today and we discover a doll that even when you’re potty training a kid and are used to getting vile human produced substances all over your body this was a bit too much for either of us. It’s not really a potty training doll, but it’s a doll to teach your little girl how to change diapers because of course, it’s their job to do it right? [ducks quickly, I’M NOT SELLING IT!] This is a doll that comes with a little somewhat hard plastic diaper that is somehow control by artificial intelligence by the doll to tell the diaper to show that it has peed, pooped, or both. How does this happen? Well, I don’t know the code someone had to write to make this happen, but the end result is that the diaper has a yellow and a brown led in it that glows to indicate whether you have a number one or number two.

Yes, you ready that write. This is a doll who’s poop and pee are so nuclear that it makes the diaper glow with light. Luckily the lights will go off after a certain time and you can put the diaper back on your atomic baby doll which would add to the mix of having to explain to your daughter why the poop and pee just disappeared and why that doesn’t happen with normal babies. My comment which wouldn’t go over very well would be, because Mommy and Daddy bought you a radioactive doll who’s poop and pee glows to wake you up in the middle of the night from it’s flashing diaper so that you know to change the diaper that the poop and pee actually just disappear from which means you can ignore it because it will go away all by itself. Wow, that was a bit of a mouthful.

Apparently I just read that you actually have to wipe a hard plastic wipe across the diaper and not the baby to make the lights go off which isn’t exactly the right way to change a diaper either, but I guess they really don’t want to teach anyone something they could use later in life. I can tell you from the number of diapers I’ve change that while less than my wonderful and lovely wife, this ain’t how you change a baby.