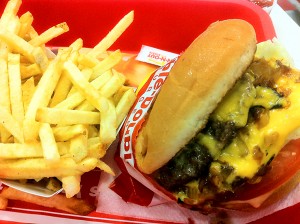 For me I grew up with the tradition of ham on Christmas Eve and Turkey Christmas Day. I ate it, but luckily I discovered my parents were putting the presents under the tree at an early age so we switched to turkey on Christmas Eve and leftovers Christmas Day. I was never very fond of turkey so after my Dad and Grandmother died I switched us over to prime rib. I mean it’s prime rib and 2-3 bones worth would feed us for a few days.

This year was different. We had decided after last Christmas that we’d do things quasi-Jewish style. Prime rib on Christmas Eve and Chinese food on Christmas Day. This came from the fact that Jews only had Chinese restaurants to go out to on Christmas Day for dinner instead of other restaurants. Why they just didn’t stay home and cook something was beyond me.

We had a couple of friends come over Christmas Eve during the day and when they left my wife informed me that she hadn’t taken out any food for dinner. So what were we going to do? Chinese food? The Pizza Place? El Burrito Express was probably closed to give the girls a day off so they could spend all day sitting at home cooking and not getting paid. My wife came up with In-n-Out Burger. At first I was a bit horrified. Burgers on Christmas Eve?!?!? There was something in that made that feel wrong, but we went.

I have to say for under $9 two burger, fries [make sure you ask for them well-done] and a coke wasn’t a bad idea. Now for me being on a low salt diet at first I thought it would kill be, but then I thought about how much salt I had that day and figured I could get below the 2000mg [1500mg was my total for the day]. Apparently we weren’t the only ones who thought of this as there were several people there. Not as many as usual, but still other people thought of it. The fact that it was the first hamburger I had in over a month made it taste even better. It actually was worth it, but I’m not sure if I’ll do it again.

Christmas Day we had a NY Strip Roast that I had never done before, but considering it’s a bunch of New York steaks all together in a roast made the idea even better. ours was 5.26 lbs which means we’ll be eating beef for the rest of the week. We would have gotten prime rib, but the cost was too much. This was boneless so it made it even easier to cut. I made the gravy and pulled out our gravy boat and made sure it was boiling hot because my wife like all her food to leave blisters in her mouth.

Christmas Day made me happy at least except half way through I forgot that I usually make some Yorkshire pudding to go with the roast. It didn’t really matter to me and I can whip some up for tomorrow. We both were satisfied by this as she got her burger and I got my roast. To top it all off we had all the dishes done afterwards so we didn’t have any clean up in the morning like we usually do.

It was a good Christmas for us even if it included burgers.