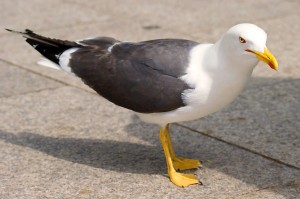 When I was a kid seagulls were everywhere in the city. You could find them more easily than pigeons. They were all over the place. When you’d be out in the school yard eating your lunch you have to watch out that you wouldn’t be attack by one of San Francisco’s dragons of the west trying to steal your sandwich out of your hand. Now you have to go to the zoo to have that experience.

Now the seagulls have been replaced by crows and ravens. Sure we had them before, but they were hard to find. Now they’re all over the place. They’ve replaced the seagulls that used to knock the lids of your garbage bins and rifle through your trash on garbage day. They sit on the electric wires looking down at you as you walk by giving you the feeling that you’re walking through a live version of Alfred Hitchcock’s The Birds.

The ravens are the eeriest of the two because they’re so big. If you go to the Randall Junior Museum you can see one up close and they’re bigger than the chickens that you’d cook up for dinner. Hell, the ravens are bigger than my old fat cat and they just sit there staring you down all the time.

I remember the first time I ever saw ravens in the wild was back in the 80’s and I was walking home from my girlfriend’s house late one night and happened to see a block of ice sitting in the middle of the street and there were two huge raven’s sitting there pecking away at the ice. As I walked by they stopped and looked directly at me and after I passed went back to their pecking. It was odd in a way because to brought to my mind Odin who had two ravens who sat on his shoulders named Huginn and Munnin. I don’t know why that got pulled out of the deep dark recesses of my brain, but it was late at night and seeing them pecking away at the bifrost just left me with an odd kind of feeling. At least they didn’t come at me like the seagulls and try and roll me for any food I might have on me.

So I’m sure there’s an Ornithologist that reads this blog every once in awhile and I ask you now, where have all the seagulls gone?