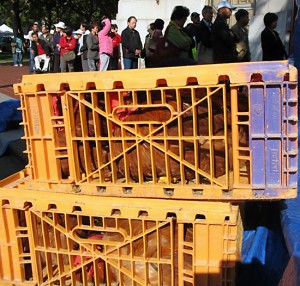 Not a big shocker here, but the United Nations Plaza farmer’s market has finally banned the sale of something that has already been against the law to sell in San Francisco—live chickens. What I find odd is that the city has let this go one for some time without having a problem with blatant out in the open violators of the law collecting money.

The chickens being sold are said to be spent hens and roosters that serve no further purpose to the poultry farm they came from and are sold stuffed into a sealed paper or plastic bag and given to the buyer to take home and kill as they please. This is kind of a rock or a hard place argument because there are lots of people against factory farming. I’ll have to say though if I was going to be a domestically raised chicken who had to die to feed other people I’d rather I be killed by trained professional with machines meant to do that than someone trying to wring my neck or slit my throat with a knife that probably isn’t the sharpest knife in the drawer. 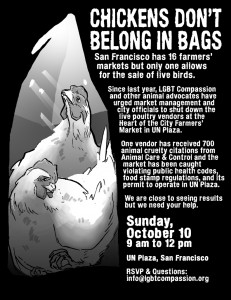 You also have a sanitation issue. San Francisco while not the densest of cities still has a lot of people coming and going and bird feces aren’t something you want introduced into large populations. That’s part of the reason most farms are outside of towns so that you can have a town in the first place.

I’ve talked about Jackson, CA before and I’ll bring it up again because I was a city boy who spent his summers in a country town. It was easy to get to the farms outside of town. It was mostly for produce because the factory meat farms where bringing the meat in cheaper. If we wanted the odd treat every once in awhile Joe Valvo down the street from my Aunt might come by with some goose eggs from the flock of Canadian Geese that occupied his front yard. Joe mostly raised them for their eggs and only ended their lives when they were started to have difficulties and then he’d have goose meat for a few weeks. The problem was that his front yard looked like crap—literally. It also smelled pretty bad on a hot day and when Joe would hose out the front you could see it all running down the street. Now this was from only eight geese that he had. When you compare this having over 1000 factory farmed chickens twice a week in a space that probably the entire population of Jackson travels through in a day and you start to have health problems.

Some people have taken the stance that these are better to eat because fresher is better. These birds are probably worse off than the chicken you buy at the store because as I said earlier, they are spent hens and roosters, not healthy birds. They can’t reproduce or lay eggs so their food supply is cut back so that the more productive birds get what they need to make more money. These are starving and undernourished animals that are probably barely up to the legal standards for McNuggets.

People need to understand that livestock butchering put into the hands of people is not a good thing. Buying live doesn’t mean it’s better quality, in most cases it’s a worse quality bird than the Foster Farms you buy at the store. These birds don’t go through any inspections or testing before being passed on to the public. Luckily there’s only the Raymond Young Poultry company that’s doing this and now he has been relegated to Richmond, CA to sell at their Farmer’s Market twice a month. Below is a piece of footage from the Civic Center Farmer’s Market that shows the pre-bagged chickens being tossed to people. Don’t watch it if you have a weak stomach.