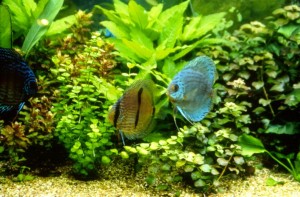 As a little kid I loved pets. We had a dog when I was a baby, but while he was very protective of me he also saw me as competition so we could be left in the same room together. Once our dog was gone my parents decided to get me more kid friendly pets. A hamster wasn’t good enough for me so my parents got me a golden-mantled ground squirrel. Not the most kid friendly pet, but it was fun to have and show off to my friends. They’re classified as wild animals now so they aren’t legal anymore, but “sniffles” was as cute as a button.

One birthday I got an aquarium and discovered I was hooked. Back in the late 60’s there wasn’t that much in the way of aquariums and the fish you had to choose from were always few and far between. Back then we didn’t know that you weren’t supposed to put goldfish in with angelfish [goldfish like colder water and angelfish were tropical water dwellers]. My first aquarium was one of those awful 10 gallons with the metal frame and we always ran into problems with it like when my mother put a decorative sea shell in a freshwater tank [bad because the mostly South American fish like soft water and the calcium in the shell leaches out and makes it hard]. So eventually we gave up and the aquarium was stored away.

A few years go by and I decide I wanted to try an aquarium again and I got a brand new set up with an outside hang on the back filter instead of the garbage undergravel filter I had before. Then something magical happened. I decided to buy fancy guppies. These were really colorful fish that one day did something I had never scene before—I saw baby guppies! and then the dollar signs started to go off in my head. I got a smaller 5 gallon tank and would scoop the babies out to grown them up safely away from their parents who would make a meal out of them. Pretty soon I was turning them in at the local fish store for credit and my hobby was paying for itself. This lasted for several years and I wanted more, so I moved up to a 20 gallon tank. I think by now I had about 5 tanks running and I had a hatcher for brine shrimp eggs to feed and bulk up the babies with live food. For those of you who don’t know what brine shrimp are think of the Sea Monkeys you might of had as a kid. So here I am in my late teens with 5 fish tanks, I should have just stamped geek on my forehead, but I was still able to attract pretty girls who liked to look at the fish in my darkened bedroom [“Eric! why are the lights off in the your bedroom!” “We’re just watching the fish mom!”] That line worked everytime.

Then one day I was in the now closed Nippon fish store and I saw a little flyer talking about the San Francisco Aquarium Society. Cool! There are other fish geeks like me who like to get together once a month and well, be bigger geeks. So I went to my first meeting at the California Academy of Sciences. There were maybe 25 people there and I have no idea what the talk was about, but it was about some fish I had never heard of. At the end after lecture they served refreshments and had a raffle. These guys actually got manufacturers and local stores to donate goods for promotion. I spent $5 on the 25¢ tickets and came home with a bundle.

Then came the big part—The raffle. OMG, I was seeing fish I had never even heard of before and it was the people in the club who were breeding them. Gee, you can breed more than guppies? I was hooked and joined that night. I received their first newsletter, Panorama and it was well, not that great. Good information, but it could have looked a lot better. So me needing an excuse to better learn page layout and graphic design redid that newsletter and brought a copy to the next meeting. I showed it to one of the members of the Board of Directors who’s jaw dropped. He asked if he could have this and I said sure thing and I offered to do the layout for the newsletter. At my third meeting I was asked to be the publisher of Panorama. I asked who the next guest was going to be and after I found out I went home and laid out some quarter sheet flyers and called my new friend on the board and told him, “Hey Jeff, I have something to show you.” Again, his jaw dropped. He took the copy and within a few days I started to notice them showing up in stores around the Bay Area.

I was suddenly becoming the buzz of the SFAS. I gave them a vision and a professional look. After being a member for one year a spot opened up on the BoD and I was asked if I would be interested. Hell yeah I was interested. I now had a chance to bring about change and learn more about the hobby. After being on the BoD for a year I was then asked to become the Program Chairman. I think this was mostly because I immersed myself in the hobby and was on the forefront of this new thing social network called Compuserve and it’s forum FishNET that I had the resources. Now I was bringing in guest speakers from all over the country even some from Germany where they were on the forefront. The SFAS started to grow with my new found marketing skills and had outgrown the little conference room and had to move into the auditorium. By year 3 or 4 on the BoD, I was nominated for President. I got elected and things really took off. We grew from just under 50 members when I joined to over 500 members and now I was even giving talks about my experience with new Dutch Plant Tanks. The limit for President was two years and I had to step down after that. After the new President served for a year some of the board members were asking me to come back again. So I did and served as President for another two years. During this time something strange started to happen. I was asked to be on a few PBS shows and I was interviewed by newspapers because keeping fish tanks had taken off like wildfire through the work of promoting the club that the BoD and the members had done. People would stop me on the streets and say, “hey you’re that fish guy”. At the time I had hair almost down to my waist, I was hanging out in the new Metal scene and I was totally dressed as a rocker at the meetings. I was trying to get a new band started, but was having trouble. I wanted to be a rockstar and in a sense I was, amongst the fish geeks. That may not seem like much, but at the time I had managed to turn the words “fish geek” into something that was cool, not dorky. Literally where ever I would go people were recognizing me. I was down at the  Monterey Bay Aquarium and people were walking up to me. I was visiting the Shedd Aquarium in Chicago and in talking to one of the people who was a biologist there I ended up getting a behind the scenes tour. My name had made it as far as the London Aquarium where I was also given a behind the scenes tour and taken to lunch.

Then as my two years were coming to a close and I had to step down a horrible thought entered my head. I made this club so noticeable because of my rockstar image would it hold up when I stepped down? I decided the find the best person for the job and get behind them and help them along. It seemed to work with me advising the new President for the two years he ran the club and we were invited to a few galas at the Steinhardht Aquarium by the Director of the Aquarium. When it was time for then President John to step down I thought about it. The SFAS has been in existence since 1932 and I only helped it out for 8 years of that time. They’ll be fine if I walk away. My life had changed a lot and I didn’t really have time for the club so I left. Not much of a problem since I was given a life membership and made an ex officio member of the BoD. I lost touch for awhile and then found out the truth—I was right. The club had shrunk down to the point that they don’t even have the required 13 board members. They no longer meet at the California Academy of Sciences and I’m starting to get calls from some of the old board members who also left and now are thinking of getting the old gang back together.

This was a great club and it still has the potential to be a great club. There are still members who have made contributions to the hobby by breeding new strains of fish, such as Dick Au and his German Blue Rams and Blue Angelfish. If you want to learn more about keeping fish properly and also be able to find some fish that you’ll never see in stores, then I suggest you check them out at www.sfaquarium.org, and maybe, just maybe we can get some of the old gang together to bring it back to what it used to be.