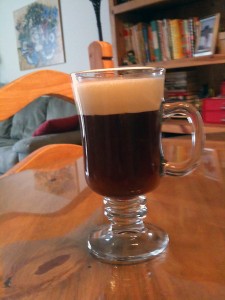 The Buena Vista and Irish Coffee have become an icon of San Francisco history. While Irish Coffee originated in Ireland, it was refined to perfection at the Buena Vista on the Wharf which is still the best place to sit and enjoy a glass looking out over the bay.

The trick in making a proper Irish Coffee starts with the glass. It is a 6 oz glass as you see in the picture. 6 oz being the optimal amount to perfectly mix all of the ingredients and the Buena Vista seems to have a lock on these glasses. I luckily have a few from the 50’s that my parents picked up when they were all the rage.

You start by pouring hot water into the glass to heat it up to a proper temperature then pour the water out and fill the glass with coffee to about 3/4’s full. Add two cubes of sugar and a shot of Jameson’s Irish whiskey, no other whiskey will do. The secret technique which took a few years for Jack Koeppler and Stanton Delaplane to figure out was how to keep the cream from sinking to the bottom. It turns out that aging the cream for about 48 hours and briskly frothing it made it float. You would then pour it over the back of a spoon to neatly let it float on top creating a drink of Ireland that was inherently native to San Francisco.

While the Buena Vista sell’s Irish Coffee glasses to the public for $5.95 each, those aren’t the real Irish Coffee glasses of legend. There is no handle on them and they appear more goblet-like than the originals. Apparently what makes this drink taste so good is the glass. At least that’s what people have been saying recently. I’m not sure if that’s true or not which means I’ll have have to pull out a bottle of Jameson’s and brew up some coffee and do a taste test.

Probably the two people who helped make the Buena Vista and Irish Coffee well known as the “San Francisco Drink” were Stanton Delaplane and Herb Caen, though Herb often ordered, “Irish Coffee, hold the coffee”. For those who don’t recognize the name Stanton Delaplane, he was one of Herb Caen’s co-horts at the S.F. Chronicle and if I remember correctly Herb’s column was on one side and Stanton’s was on the other.

As a kid I looked up to these two because they made San Francisco more than it was. They were old school, kind of like Sean Connery was old school Bond compared to Timothy Dalton who’s now old without the school. That’s probably why I liked things like scotch and vodka martini’s before I was old enough for people to think I should be drinking them. Irish Coffee is one of those old school drinks that I think needs to make a comeback with the vodka and redbull crowd. Irish Coffee was the vodka and redbull of the old days. It turned you into a wide awake drunk so that maybe you’d remember how stupid you acted the night before.