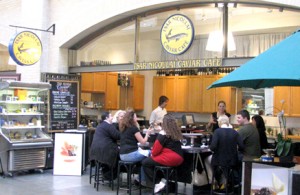 OK, I’m getting a bit foodie again, but this place came to mind tonight after watching an episode of Chef Daniel Boloud’s After Hours. In the show he brought a chef he would be cooking with that night some of his own name brand caviar. Now for me growing up, fish eggs were something you used as bait when fishing, mainly salmon roe. Then one day a woman walked in to the printer I was working for who needed some folding done of some cards they were sending out. She was from the Tsar Nicoulai Caviar company that was next door. We did the job and when it was finished and I delivered it within an hour she was so happy she gave me some black truffled infused osetra caviar and smoked sturgeon. It was about a 2oz jar which for caviar is pretty sizeable and I had learned that this company which has farms up by Russian River uses sustainable farming techniques. This is due to a ban on importation of Caspian and Black Sea caviar due to the fact that the sturgeon are on the endangered species list from being over farmed.

Fish eggs? hmmmm. I wasn’t sure what to think about eating fish eggs, but I had just received something people who usually make about 3 times what I was making usually get to eat. So i figured I’d do it up right and bought a bottle of Stolichnaya vodka and went home and put it in the freezer. Aside from smoked salmon, I don’t tend to like smoked fish so I gave the smoked sturgeon to my mother who said it was really good. By now the vodka was properly chilled and we broke out the blinis and creme fraice. He both looked at each other with a “you go first” kind of look. We both threw them back and began to taste them. Suddenly, I understood the “nutty, briney earthiness of this caviar. The earthiness was most like from the black truffle infusion which usually means it tastes like dirt, but still it was pretty good. I was really surprised I would actually enjoy this, but it was really good.

Apparently, it’s so good that there are top named restaurants around the US who are purchasing their caviar from them. Thomas Keller, Charlie Trotter and Rick Moonen to name a few. What they’re doing they’re apparently doing right and getting lots of acclaim for it. They have a café at the Ferry Building where you can have tastings paired with sparkling wines that will run you from $42-$102. Not cheap, but it’s definitely worth a try. They also have a wide range of sandwiches and salads that incorporate their caviar and smoked fish as well. I have to tell you that their smoked salmon is incredible and they don’t focus just on sturgeon caviar, but have other less expensive versions from paddlefish and whitefish that  have a great taste as well. If you have the time and little extra money and want to feel a bit like James Bond, check these guys out.