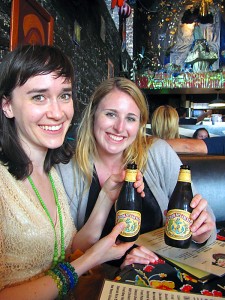 If you’re asked this it’s probably that you told a native you’re from San Francisco which comes with the follow up question, where are you from? It’s not that they didn’t hear you the first time, but that they want to know what district or area you live in. That used to tell people a lot about you, but things have changed over the years. It used to be when some one would find out my family is Italian they’d ask, are you from the Marina? Not so much anymore [yes, my family did live in the Marina before buying their house and after moving out of North Beach.] The Mission used to mean you were hispanic and not a hipster. The Sunset and Richmond meant you were a closet suburbanite with one foot in the city and one foot out. Sea Cliff, Nob Hill and Lake Street meant you had money. The next question you’ll get asked is:

This is important as it refers to your High School. Again, it used to mean more about who you were than it does today, but it’s still asked. It’s more important if you went to a Catholic school, but public schools told you a lot about the type of person you were. It also tells about the people you would hang out with.

This should have been first, but it’s pretty much a given. You can call it SF, you can call it the City, but you never call it Frisco. I don’t care who you are.

Now, how do San Franciscans speak? This was the tricky part. We kind of smash words together in an supercalifragilisticexpealidocious kind of way. It’s a bit of a lag and a slurring of words so that you’re not sure where one ends and the other starts. San Jose becomes san-osay and Santa Clara becomes sanna-clerah. Very little emphasis on the hyphen.

Then there is the mangling of words. You can tell how long someone has been in San Francisco by the lack of street identifiers in directions. While we have  streets and avenues that are numbered, most places you leave it out because there’s no what telling someone to go to 2nd and Howard would mean 2nd Avenue. Street number always comes before the name as well.

As for mangling names, Junipero Serra Boulevard wasn’t pronounced like it was two Spanish words until I met someone who was Hispanic that actually spoke Spanish [I’ve been here along time, can you tell?]. We always called it Juniper-serra like it was one word smashed together and no boulevard either. This comes from people who’ve been in San Francisco for many years just like the old military base is called the Persidio, not Presidio. In general Hispanic street names are fairly anglicized unless you’re Hispanic and speak Spanish on a regular basis. Taraval Street sounds Terror-vel and Quintara Street is Quin-terror not keen-tah-rah. I guess you could say we kind of talk like we’ve got marbles in our mouths a bit, but then people throw street names at us like Gough Street which is Goff, not Go.

You’ll have to find people who are at least second generation and then ask their parents to talk to experience it. Once you hear it you’ll realize that it is a kind of strange accent, but it’s just another way to tell who the true San Franciscans are.