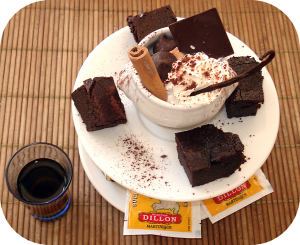 Well, finally! I get to talk about food again. I’ve been reading quite a bit lately about people labeling San Franciscans who like food with the term which I assume is derogatory, “foodies” or more specific, “San Francisco Foodies”. I say derogatory because the word “smug” usually comes up in most cases.

Yes, we’re smug, we know it all and we could fix the world if you’d just let us, but let’s put that aside for a moment. Let’s look at the word foodie and how it applies to San Francisco. Originally coined in 1981 by Paul Levy and Ann Barr and used as the title of their 1984 book, The Official Foodie Handbook. It described a person who was not a gourmet who had a very sensitive palate that could discern the difference between a 1978 Chateu la fit Rothchild and and 1979 Chateau la fit Rothchild.  Anyone who comments on my possible misspelling is not a gourmet, nor smug, but a snob who can’t find anything else to pick apart to discredit me.

Foodies are people who have a love of food that tastes good and are interested in why it tastes good so that they could possibly make it themselves. There was a term prior to this that actually fits San Francisco foodies much better. That term is Gourmand. They don’t necessarily have the refined palate of a gourmet, but they can at least tell the difference between a Cabernet and a Merlot and they love food whether it is a succulent slice of prime rib from the House of Prime Rib to a bronco burrito from El Burrito Express. I would say Gourmand is a much more fitting word than foodie. First off, while being a modern word, foodie is almost 30 years old and well, sounds so 80’s even though I don’t remember anyone using the word here in the 80’s. Gourmand in and of itself is a word that has some class behind it, probably because it’s a smug French word and we being the smug people we are should be able to identify with it more.

In a recent story I read in a place I can’t remember, but probably sfgate.com, they mentioned that New York has the most diverse cuisine options to eat followed by San Francisco then followed by, well who cares, I’m trying to focus on San Francisco here. We are the second food Mecca of the US with the flavors of many countries around the world at our finger tips. Yes, we have lots of high brow restaurants in this city, but the people who eat there are perfectly happy walking up to a taco truck or one of the new versions that don’t serve tacos, but some form of portable cuisine that’s fast and easy to get and tastes good when you’re sitting on the curb consuming it.

There is a guy in the Mission who cooks up crepes from a side walk stand that moves around daily and he announces where he will be on Twitter. We have trucks that drive around the city cooking up BBQ, Korean food, even curry dishes. Highbrow? Nope. Good food? You bet.

Anthony Bourdain, a former chef who worked in gourmet restaurants travels around the world eating what he calls good food, well….I beg to disagree. He did a show in San Francisco and ended up eating a burger at Red’s Java House. There are some people that love the place, but I had a burger there once and I’ve done better with frozen burgers from Costco. A good burger shouldn’t be served with processed american cheese in this city. Anthony didn’t focus on any of the great mobile food purveyors in the city, but he did at least start with the House of Prime Rib. Anthony I would call more of a foodie than a gourmand. He’s trying to identify with the normal person who likes food, but he tends to choose places that don’t serve very good food when he steps down to the level of the average person and he basically eats shit.

San Francisco foodies [gourmands] can usually cook for themselves and enjoy cooking. There is nothing better for me than a day in the 60’s which causes me to pull out the BBQ. I try all sorts of different marinades and side dishes and in the event of a major disaster I know that my family will be well fed. I know how to turn a cheap piece of meat into a 5 star dish because that’s what you need to know in this economy. We know that you don’t have to pay $300 for a meal for two in San Francisco and sometimes the better meals you can get for under $15 for two people.

We also like to try new foods that are outside our comfort zone such as the fruit cherimoya. It really does have a taste like bubble-gum and pineapple but with all those seeds you have to be careful not to break a tooth. I have indeed stooped to the level of what some people would call third world countries and through some of my hispanic friends have been able to try chapulines over several shots of tequila. It takes about five shots of tequila for the average caucasian to even think of popping a deep fried grasshopper in their mouth, but I admit, they’re tasty. I’ve eaten dim sum that I have no idea what was in it, but it sure did taste good. I should probably learn more Cantonese or Mandarin to better converse with the vendors to know what I’m putting in my mouth, but if it looks good I’ll try it.

So for now, I’d say we should move away from the term foodie in favor of gourmand because after all we are San Francisco and we’re smug. Get over it.