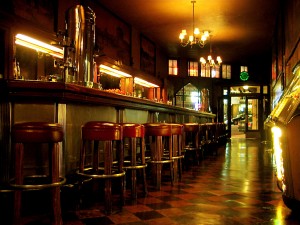 It has finally happened. At 2am Monday morning the doors of the Tosca Cafe closed and the ownership under Jeanette Etheredge came to an end. It is scheduled to re-open with new owners and the only thing that will change we’ve been told is that it will now serve food.

Jeanette Etheredge will always be welcome said new owners April Bloomfield and Ken Friedman, but there is something to be considered. The new owners are from New York and if there’s one thing San Franciscans like to thumb their nose at more than Angelenos it’s New Yorkers. We don’t like the pompousness of the food they present. We aren’t going to pay $200 for a skewer of lamb that was made while the chef was standing on his or her head while singing Verde. Food is not about what goes on in the back room, it’s about taste and the look. We don’t need gold leaf on our hamburgers if we can’t taste it. We love good food and we’re practical about it.

So we have a couple of New Yorkers who sound like they understand this and don’t want to change a San Francisco institution. Good for them. They better keep to it. Minor updates aren’t a bad thing and I honestly believe if they clean the nicotine stains off the walls that would be an improvement even if they added a bit of character, but I fully expect when I go in there to see the bartenders wearing the old school lab coat style jackets and ties. I fully expect the Irish Coffees and Cappucinos to remain unchanged and when they add food they better take into consideration of the last paragraph.

Hipsters and others moving into San Francisco are killing off the history of this city that attracted people to it over the years. This is a bad thing because they’re actually destroying what brought them here in the first place. Tosca is a hold over from a long time ago and its class doesn’t really attract the hip crowd. It attracts a more grittier type of people with a few lines on their face and some history behind them, not the nouveau types who have come here to make a few bucks and leave.

On closing night you could see why Tosca was so popular with some of the more colorful people of San Francisco. Francis Ford Coppola, Will Durst and Carol Doda were some of the names of celebrities who were there. They may not all be A list, but they’re all well known enough that they’re appearance made a statement.