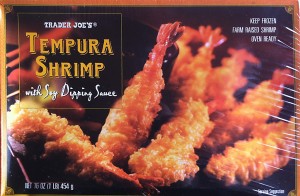 A long time ago in a Trader’s Joe’s far away…wait, nope scratch that, I mean the Trader Joe’s at Stonestown. I went in the other day because we had run out of…tempura shrimp. Alas there was nothing in the freezer case and I walked to the back to ask an employee if they had any in stock in the back. She rushes out to verify that I had just told her there is no tempura shrimp in the house. She then runs off to find a manager or someone to ask about when it will be coming in. I wait…

About five minutes later she comes back and informs me, Oh, we don’t have it because we’ve discontinued stocking it. WHAT?!?! Now if you remember back a few days you’ll remember that they had discontinued it, but at my request restocked it only to find out that it was selling and that they had sold out when I went back only to have the staff running around frantically to calm down Tempura Guy™ so that he would not level the store.

Well apparently I wasn’t scary enough the first time since this impish little waif did not fear The Wrath of Tempura Guy™. Tempura Guy™ goes into stealth mode and upon returning home visits the Trader Joe’s website and using the contact form sent a noted regarding the Stonestown Trader Joe’s that they had discontinued, then restocked, then discontinued again a produce in less than a month! Add major sabre rattling and huffing and puffing to the electronic correspondence and click submit.

Tempura Guy™ loves his keyboard lycanthropy and the power it brings him. Tempura Guy™ feels good about himself and his love of the holy tempura shrimp, hallowed be thy panko encrusted name. Then, it happens. The Darth Vader theme ringing from his iPhone alerts him to a phone call from Trader Joe’s. Tempura Guy™ answers and hears the voice of a stammering store manager apologizing profusely, something akin to……I am terribly sorry Tempura Guy™, I don’t know who told our crew member that, but they were terribly misinformed and we have two cases in the back to fulfill your needs and desires for tempura shrimp and we are stocking our freezer cases right now. Ok, that sounds a little creepy to me. I mean it’s not like I’m buying it for sexual gratification, I just like the taste of it. He really did use the words needs and desires.

So now I am off to Trader Joe’s where I will hear whispered conversations as I pass the crew members of, it’s Tempura Guy™ as the crew members step out of my way. I think I will add to the frivolity by asking to speak with the manager and shake his hand for coming through for me. If I had the time I would make some sort of stupid plaque that says something like, Tempura Guy™ blesses this Trader Joe’s.