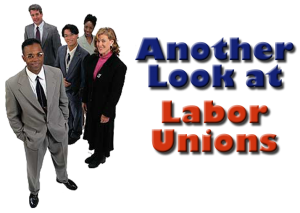 I was working at a printshop a little over a decade ago and lost my job after I had a stroke. I wasn’t exactly told why, but they let me go. I can only assume that it might have raised their insurance premiums because I has a health risk. As it turned out the company started to go downhill from there. I have a curse that I somehow developed in that every company that I have been laid off/fired from usually goes under within 6 months. There’s only one company so far that’s still moving along in a crippled state and they should be gone shortly.

Now after I lost that job it turns out there was a print service bureau up the street that was getting more work than they could handle and I was the cute hard working guy they new because when we had a breakdown in our film processing equipment they’d send me over there for a fix. This was a union shop and I had never worked for a union shop before and my eyes lit up. Unions! They always paid you big bucks, got you great health benefits and you got lots of time off and in this case you only had to work a 7 hour day which included your lunch. Two thumbs up! Strangely enough, the three owners of this small business started the company unionized. As a matter of fact the printers union was the first union ever started int he United States. Well, this is where the fun stops.

I was used to having to produce start to finish 30-40 jobs a day from electronic artwork to finished printing plates. Now I only had to produce the finished artwork. I liked starting at 7:30 in the morning which seemed ambitious to everyone except one of the owners who would open the place at 7am. While things went fine for a few months I noticed them asking me to slow down on my work because I wasn’t leaving anything for the other two workers to do. Then with the dot com bomb there slowly became less and less work coming in and because I was so efficient they were having to send home employee’s with more time on the job. This was totally against union rules and so since I was the newbie to the bunch they finally laid me off. The unfortunate part was that the others who worked there weren’t as efficient as I was so in the end even though they had less work, what was taking me 15 minutes to do was taking them 2-3 hours to do and they started to lose customers which meant even less work and they eventually closed down.

Today you won’t find a single union printer within San Francisco and you won’t find very many small non-union printers in San Francisco any more either. So now let’s move forward a few years. I was out of work and heard that Safeway’s union had re-negotiated their pay scale so that checkers were making $20/hour. I start thinking this would be easy so I went in and applied and they were very eager to hire me. I passed all the tests with flying colors and was invited to the first training meeting. Here’s where it starts to get weird. Most of the people in the meeting did not have English as a first language there were four people who fell asleep during the training session and one women who just about passed out, but it still sounded great so I went along with it. They didn’t say anything about pay though so after the four hour training session which happened to be at my local Safeway I went down and found the manager that I always said hi to when I was shopping there. I asked him, “So I hear that the checkers are making $20/hour now when does that start?” His answer, “They didn’t tell you in the meeting? You start at minimum wage which after a year you were eligible, but not guaranteed full time work at minimum wage and you get incremental pay increases each year so you won’t be making $20/hour for about 10 years.”

Crap, waste of time. I can’t raise my family on $9.75/hour part time. Start looking again. This led me to start thinking about unions.

Unions were started to protect workers from being exploited by their employees. This was a good thing. People weren’t being paid what their job was worth in the marketplace and when they unionized they had higher wages, job protection and benefits. In Safeway’s case they may as well have not been unionized because they were paying crap and had a high turnover rate. Most of the people in the training session with me weren’t even legal voting age yet. For them it was probably a good job. For me having a family it sucked.

Then you have toll takers on the Golden Gate Bridge that they’re going to be getting rid of because their union get’s them paid $27/hour and fully paid benefits for them and their families at no additional cost. They have to paid about $50 union dues a month which at $27/hour is nothing and their job…taking money and making change. $27/hour is a bit on the high side wouldn’t you say? You don’t even need a high school diploma to get that kind of job.

Workers do need some protection, but by this I mean good workers. People who have the talent and skills to do the job should be paid accordingly. We now have lots of “start ups” I attended a meeting of one last night and I worked for one a few months ago under the jobs now program. Then I was getting paid because they were getting reimbursed by the federal government for hiring unemployed parents. Great job. I was being paid what I was worth and encouraged to learn new skills. Then the subsides ended and so did the job unless I wanted to work for private equity. Private equity means you earn shares in a company that are pretty much worthless unless someone offers to buy out the company. There are many companies who managed to make this work, but there are far more who haven’t. While computing is moving towards the cloud, I’m not letting my paycheck move there as well.

San Francisco has tons of start ups all over the place. We have our Twitter who’s doing quite well and hasn’t gone public yet, but I’m not sure how they’re making their money other than getting rich investors to toss money at them thinking they’ll make it work one of these days. MySpace on the other hand which isn’t SF based, does or rather did have an office in SF where they just had to lay off everyone because they aren’t a cool start up anymore.

Just as our government has become polarized on the left and right so has the workplace. You have unions that support unskilled laborers with high pay and good benefits, then you have startups who support highly skilled laborers for little or no pay. We need something in between what San Francisco needs is a work meritocracy. If you’re good at what you do you should be paid for it. If you’re not good at what you do then you should be paid less or not at all and lose your job. Work efficiently and produce more at a higher quality means you are more valuable to your company and are a more commercial commodity. Let’s move back to that way of life.