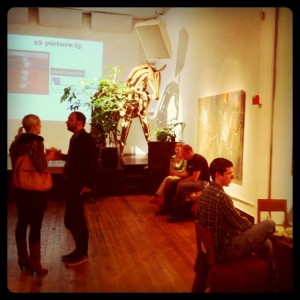 Ye Gods! My head is still pounding from Friday night. After working for years right across the street from 111 Minna I finally had an excuse to go in. I definitely would have to recommend the place for people to visit if you want to get the hipster vibe of San Francisco.

There is so much going around in my head that I want to cover I hope I get to all of it. First the hip vibe of the place. Two bars with a wide selection of liver degrading beverages to offer. On this night it was open bar on Blue Moon Beer and fair trade Quinoa produced vodka. I started with samples of the vodka and then their goji berry infused vodka. Pretty good stuff I have to say, but since I hadn’t eaten anything yet I definitely started to feel it quickly. Everyone in the place had a smartphone [usually an iPhone] in their hands the entire time.

I ran into Greg Dewar of the NJudah Chronicles and then the Blue Moon started to flow. Greg made me realize that there is a part of social media that we often leave out, that’s the part where you get away from your computer and go outside your house and actually meet the people you tweet/facebook/foursquare with. Greg knew just about every blogger of influence in San Francisco and he introduced me to them [if they were there and not home writing their blogs].

My first introduction was to the most fabulous [and tall] Beth Spotswood. I frequently read her blog at sfgate.com and I think I’ll focus more on checking it out after I’ve met her. She is bubbly and vivacious and when she walks into the room you know she’s there. You don’t have to look for her. I couldn’t even get a picture of her because she always had a crowd around her.

Then I got to meet Broke Ass Stuart. WOW, what can I say. I had never seen a picture of him but he was exactly what I expected him to look like. Rockin’ a suit and tie I had about 60 seconds before a wave of hotties crashed all over him and he was swept away. I didn’t even have a chance to remind him that I was featured as the broke ass of the week on his blog a few months ago when I was a broke ass, but he was definitely the pimp daddy of the evening. Ah I remember the days when I had that kind of mojo. I need to get out more and meet these people.

There was Tom Prete of Ocean Beach Bulletin and Woody LaBounty of the Western Neighborhoods Project who I’ve know for a while. I was a bit honored when Woody referred to me and the local bloggers of the Sunset as his media reps. These are two blogs that people with an interest in the Sunset District and the Old San Francisco should definitely check out. I was sorry that I didn’t get a chance to meet Breanna Lambert of ScoutMob since we tweet back and forth with each other frequently, but it was probably an in/out for her since ScoutMob had their own party going on in the Haight.

Now let’s talk about the food. Inside there was The Heartbaker offering up some yummy desserts and luckily I got to them when it was early and I was their first customer. I tried one of their carmel brownies with sea salt. Now I’ve seen sea salt as an addition to chocolate, but I haven’t had a chance to try it. I have to say, it’s not weird. It’s great. I started to feel like one of the judges on Chopped while I was talking with them about how you’re first hit with the chocolate then the carmel slides onto your tongue adding sweetness to balance the tart of the dark chocolate followed by a salty burst at the end. Just as a side note, I have to say that seeing a group of pretty girls with lots of tattoos that could cook was a real treat. 15 years ago pretty girls with tattoos that I knew couldn’t make a cup of coffee.

Outside was where the real action was. The Bacon Bacon food truck was working the alley and they were a big attraction. Bacon, Bacon and more Bacon. Once again, they had Bacon dipped in chocolate, dredged in toffee. It was very, very good, but I could barely taste the bacon with all the great chocolate that was on it. Just so you all know Bacon should always be capitalized. That is not poor grammar on my part.

The only downside of the evening was the DJ. Not that the music was bad, but I decided to pull out my decibel meter to check and I can give the rating at Motorhead loud. It was definitely past 120db’s which isn’t very good for your hearing in the long term. Plus you pretty much had to scream to talk with anyone or go outside.

All in all it was a fun evening that warranted not just one photo, but a gallery all to itself. I would have taken more pics, but after I started meeting people I had to stop for a bit.

Ok I’ll step back from food for a minute and talk about the technological wonders of the Bay Area.  We are probably one of the most tech-savvy areas in the world. Maybe we don’t have scream powered cars like they do in Japan, but just about everyone I know has a website or is a blogger etc, etc, etc…

Well a few years ago when I was paying well over $200 a year to host my first commercial website on about 60mbs of space it seemed a bit expensive. I think it cost $50 a year to register a domain name back then as well. Well prices have dropped. I wanted to let you all know of a super deal that you can get through our sponsors hostrail.com. This company will give you 30Gbs of space on your own virtual private server for $7.99/month. If you want even more bang for your buck if you buy in use the promo code LGN09 and you’ll get an additional 30% off for the life of the account. That brings the price down to less than $5/month.

A VPS gives you overall control of the server and you could even sell off space to your friends and make some extra money. The Bay Area is home to techie entrepreneurs so why not give it a shot. They have 24/7 onsite access and I’ve never seen one of my sites go down. My last provider was charging me $45 a year for 200mb of space so just do the math for a few seconds and there’s a lot of potential there. With this you also get full access to cpanel [which will give you the ability to auto install several add ons like wordpress that I’m using] and whm control of each site and overall VPS control. Many of the providers are doing this sort of thing so why not jump in and do it yourself. Say you offer 1Gb of space for $50/year that would be an extra $1500/year you’d be getting then you could move up to even bigger servers and make more money.

All you have to do is monitor you email and the rest of the work is done for you. They also have an affiliate program so you can use that to make even more money. So take my advice and check them out.