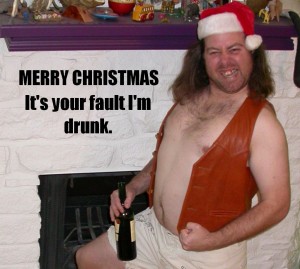 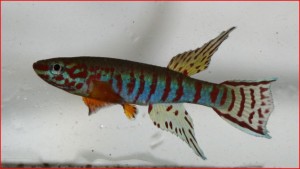 Welcome to the first meeting of fish geeks anonymous. I’ve been keeping fish for over 30 years as pets and as decorative accessories to add a little umph to my dwellings. At the worst I had over 11 fish tanks in my home. Then I kicked the habit for the most part, but held onto my 55 gallon fish tank. I’ve had freshwater, saltwater, brackish water fish tanks. It became a bit of an addiction for awhile.

It got so bad that I became the President of the San Francisco Aquarium Society where I was on the Board of Directors for 10 years and served as President for 4 years. Not something many other fish geeks can claim. I thought I had gotten over the whole fish thing and then I was looking around through my book collection and found a book long forgotten, “Breeding Killifish”. You notice it wasn’t titled “Raising Killifish”. What’s a killifish you might ask? Well the picture along with this post is of a killifish. This is a killifish that when I first saw it I wanted it big time, but no one had it. It doesn’t have a common name like many killifish, but it has a scientific name of Aphysemion elberti “Bafoussum”. The Bafoussum part means it’s from a part of Africa called Bafoussum. Killifish are interesting fish. They’re the most colorful fish in freshwater and give many of the saltwater fish a run for their money. They’re easy to care for, don’t need a heater unless you might live in Alaska and they breed like teenagers in heat [i.e. daily]. They have somewhat hard eggs that if you build a little mop out of knitting yarn they’ll lay eggs daily that you can pick off with your finger and drop in something as simple as a baby food jar with some water and they’ll hatch in 2-3 weeks. These are the top spawners I like. There are bottom spawners that  lay their eggs in peat moss [in an aquarium] or mud [in the wild]. I don’t like the bottom spawners as much because I’m an impatient type of guy and don’t like to wait 6 months for the babies to hatch out.

I have searched for over 20 years for this species of fish and today I finally met up with my new bestest buddy in the killifish world Ryan Grisso who gave me a pair and insisted that he wouldn’t take a cent for them. Ryan is a member of the Bay Area Killifish Association and these guys are serious about killies. These guys breed killies from all over the world and trade and sell them at their meetings. One of the few things I’ve never seen someone with killifish do is set up a nice planted tank filled with these fish. I had a friend once who was big into them and brought me over 100 of them for my 55 gallon tank and told me to feed them every time I passed the tank. The fish tank was the focus of the Christmas party I had that year. People didn’t know how colorful these fish were, how easy they were to take care of and how you can keep making more of them.

Most killifish come from water that isn’t that great in dissolved oxygen so they’re used to doing odd things like jumping out of the water and living the wet grass next to the water. The bottom spawners tend to be like a phoenix in that they breed in puddles that dry up and then when the rains come later on in the year they’re reborn again.  I’ve never heard of a fish that lives in conditions like that.

Now before you get all excited and are going to run out and get some of these fish you have to remember one thing. Normal pet stores won’t carry them. Probably because the wholesalers don’t carry them and also because they’re so colorful people think they’re tropical fish and keep them in warm water and they die. There are a few stores in San Francisco that will occasionally have some, but that’s nothing compared to the mollies, swordtails, guppies and neons that are standard fair in most fish stores. Killies are a rare treat as they’re easier to keep than goldfish [they’re smaller so they don’t poop as much]. You can actually send them across the country via priority mail and they’ll get their alive. They don’t need a lot of maintenance and for the most part they will live fine on flake and freeze dried food. So tell your fish store that you want killifish so that they start carrying them or if they don’t contact me. If you need more info on them drop killifish into google and see what pops up. It will boggle your mind.