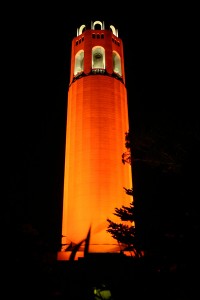 I decided to go for a bit of titillation for today’s story, but it’s something that many of you may not know about it’s “titillating” background. Coit Tower was built in 1933 by the bequest of Lillie Hitchcock Coit to beautify the city as well as to commemorate the firefighters of the city. In particular she was apparently rather fond of the firemen at Knickerbocker Engine Company No. 5.

It is said that the rather tall tower was to replicate in an art deco, abstract way a fire hose nozzle. Now I like firemen myself as they’ve helped us out on numerous occasions when my elderly parents and grandparents were alive. I am not leaving one-third of my estate to them though.

Lilian had a bit more of a how do I put this…”devotion” to the burly firemen of company No. 5 and some have said that it wasn’t a representation of a fire hose so much as it was a representation of, well, uhm, uh, a “fireman’s hose” if you know what I mean, and I think you do.

Lillie was a bit of a randy sort of woman who was a character that made San Francisco what it is today in many ways. She was an avid gambler and cigar smoker and even dressed as a man to be able to get into gentlemen’s only gambling establishments. She wore pants before it was fashionable and loved to thumb her nose at the establishment. People forget that the 20’s was the decade of “free love” before the 60’s and there was lots of naughtiness going on around the country and especially in “Baghdad by the Bay“. Her “appreciation” of the fire department even earned her the title of “Honorary Fireman.” In addition to Coit Tower she also had a statue of three firemen carrying a woman, presumably her.

[mappress mapid=”31″]OK, enough about the randy old lady of San Francisco. Let me tell you a little bit about the tower itself. Well, it’s a tower, a big one and that’s pretty much it. But if you take a closer look when you walk inside you’ll notice murals on the walls that were painted as a part of the Public Works of Art Project that was to help employ artists during the depression. One of my aunts was an artist that painted the murals there.

While I’d love to say it’s free to ride to the top, it’s not, but it’s still pretty cheap. $4.50 for adults, $3.50 for seniors and $2.00 for children 6-12, under 6 is free. So why should you pay to ride an elevator? Well, when you get to the top you have a view of San Francisco that you won’t get anywhere else. 360° of pure beauty and you can stay and take pictures for as long as you want. It’s an open air rotunda that I’m surprised they haven’t put up anything to keep people from using it as a great place to have a last view of the city before jumping off to end it all. I guess it’s such a view that you don’t want to leave it all behind once you see it. 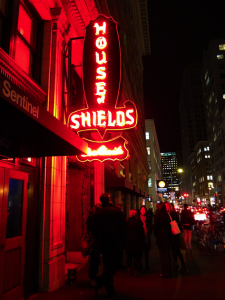 Way back when [1908 to be exact] the House of Shields opened its doors to customers. It was a place I last got to visit sometime in the late 80’s early 90’s. It had a feel to it like a Bogart movie. Over the years it retained some of the Victorian dusty feel with a bit of an art deco upgrade from the 20’s.

The food was old school. I remember my meal there. Pork tenderloin medallions with mashed potatoes and gravy and some sort of sauted vegetable that was probably there more for decoration than eating. When was the last time you saw that on the menu. I also remember our waiter, “Vinny” in his tuxedoed waiter’s uniform suggested them. He was right. They were great and I think that might have set me off on my now well developed love of pork.

House of Shields was classic San Francisco, Herb Caen and Charles McCabe used to write about it frequently in their columns, yet when it closed it didn’t look closed. It looked more like, “we aren’t open yet.” I haven’t been back since it opened in mid-December, but I think I might make a trip back for old times sake. While I hear a lot about their chef in the press I don’t see any menu on their website and it seems they’re mostly focused on the bar which has now been taken over by retro hipsters ordering appletini’s instead of the old days of, “Gimme something big and strong”  which meant a double scotch, no ice. You didn’t call out a brand name, you didn’t even need to call out what kind of liquor your were ordering. 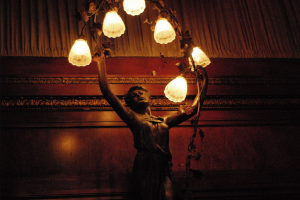 During prohibition what is now their private dinning room served as a speakeasy that dinner guests could sneak off to for “something big and strong” in between bites of their meal. I have a sneaking suspicion that while the House of Shields is back in operation and the inside has been restored, the new hipster crowd might just kill off that old Bogart movie feel, but you never know.

I noticed that they feature live music on weekends and the bands get to keep 90% of the $5 cover charge at the door. Not too shabby for musicians and definitely not like the pay to play of the 80’s for bands.[mappress mapid=”8″]