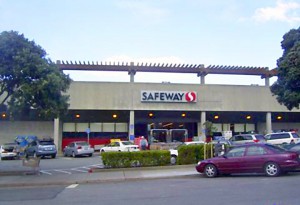 Apparently people like to complain about the service and stock at the Safeway groceries stores. I understand that, but I noticed something about a Safeway close to me that adds a new twist to the equation. What happens when former employees start complaining about the store?

My wife and I used to shop regularly at the Noriega and 30th Safeway, but since we have a car we’ve started to go to the beach Safeway in the Richmond District or the Daly City Safeway in Westlake and we’ve discovered something in our trips. All over the city in just about every Safeway we’ve been to we see a former employee of the Noriega and 30th place. When asked they all say the same thing, that was the worst place to work.

Now it’s one thing when people who shop there say that because well, people like to complain. I get that, but when the employees are moving to other Safeway’s because they don’t like it that’s a whole different story. I have to say that my experience has been seeing only cashiers that have moved to other locations and I can see why. They don’t like being associated with that store. They’re pretty good at what they do, but to be associated with all the other bumbling people who work there is something they don’t like so they move on.

So what exactly is the problem with this Safeway that puts it above the rest to be called the worst Safeway in San Francisco? Take a look at my personal list of favorites:

Is that enough? I actually applied for a job at Safeway once and when going through the 4 hour training at the Noriega branch I learned something. They send people out to check and make sure that they’re following company policy and they listed a number of things they looked for. I guess they didn’t check this store prior to telling us that because they were in violation of every one of the rules that a Safeway isn’t supposed to break.

This is all very sad to me because I like to go out grocery shopping and I don’t like to feel like it is or should be an ordeal. I’m lucky in that I don’t have a problem driving to other Safeway’s, but I feel that the one closest to me should hold up its own and do the job it is supposed to do. There’s only a few cashiers left who know what they’re doing and once you learn who they are you pick them out right away and stand in their line even though you know it’ll be a longer wait.

OK, time to run off to Lucky’s…