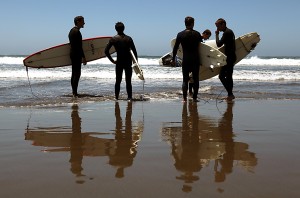 Now that my Mother is gone I can come out publicly. I was a teenage surf bum. My Mother would always tell me the horror stories of how surfer’s would get pulled into the undertow and sucked out to the Farallone islands. I always thought that was a bit of overkill, but she just never wanted me to surf.

Unfortunately when you push too hard against your child not doing something it only makes them want to do it more. Good work Mom. I had a friend that lived a block from the beach and we found a couple of boards at a garage sale out there one day and picked them up for around $50 each [this was back in the 70’s when things were cheaper]. I had no idea how to surf other than watching people surf on TV. We did make skimboards that you’d throw on the surf as it washed in and then you run and jump on it so we at least knew how to wax the boards.

Ocean Beach is actually not the best place to surf. Unless there’s some really bad weather the waves aren’t that great and yes there is that nasty undertow, but I was a very experienced swimmer so that wasn’t too much of a problem. Ocean Beach was surfing as I knew it [our spot was Kelly’s Cover] until one day when my friend bought a car and suggested we try out the waves at Santa Cruz [I would never try Mavericks]. We packed up the station wagon and go on the road one weekend. I had never really been to a surfer town before and our jaws dropped when got there and saw girls in bikini’s everywhere. I was in heaven.

I also didn’t see anyone in wetsuits like you had to wear in San Francisco. It was all surfer shorts. We grabbed the boards and hit the water. Much warmer than San Francisco and very smooth waves. It was a lot less work than the waves in San Francisco and I think because of that there were more surfers. While we were taking a break a couple of the locals came up and started the conversation with, ‘Frisco right? [Grrrrrr]. Yeah, let me guess, the wetsuits gave it away? Yeah. OK so there was an apparently rivalry between SF And Santa Cruz and I wasn’t even aware of it.

I ended up giving up surfing when I turned 21. I don’t exactly know why, but I just lost the desire to go out into that freezing cold water. When my wife and I got married we did take a trip to Hawaii and I was tempted again, but I didn’t go for it. I suppose I didn’t like all the little fish swimming around in the water bitting at the hair on my legs. That and the fact that the fish were probably bigger as you went out farther. I’ll just keep it in the back of my mind for now and maybe one day I give it a go again.