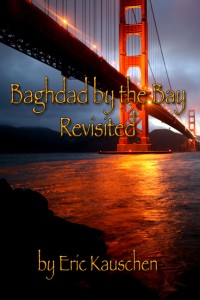 Well, I’m still a bit in shock over this, but yesterday I received a call from Runa Raven Press and they have asked me to write a book about Baghdad by the Bay: San Francisco. Now Herb Caen did a fine job with his original Baghdad by the Bay, so I’ll have to call it Baghdad by the Bay: Revisited. The city has changed a lot since that book was written and at first it was just going to be a repurposing of my blog posts, but now I think I’ll need to step things up a notch or two.

I’m going to talk about each and every district in San Francisco with its history and how it changed into what it is today. I’ll also talk about the politics of the city and foibles of our politicians, new and old. Granted, it will all be from my perspective, so it may not always be entirely correct, but it will be how I interpreted the information that I’ve found.

I won’t be quitting my day job which I don’t have yet, but I think it will be something that a lot of people will like. I’ll keep you updated on the progress of the book as it comes along. I’ve done a lot of things in life, but I have never thought of myself as a writer. Now I’ll have a chance to see how good at it I really am.