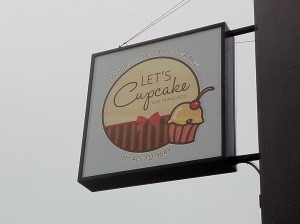 While it may not be a perfect method to see that things are coming back, I have been noticing a distinct trend lately out here in the Sunset — businesses are coming in that are a little bit different than what we had before. These new places have an appealing look to them that makes up want to come inside. Even some of the older businesses are giving themselves a new paint job as well.

My wife saw a place today as we were driving back from a decadent trip to Andronico’s and it’s a little bakery called, Let’s Cupcake. I don’t know how long they’ve been open, but I haven’t noticed them before so it must have been fairly recent. We stopped by and picked up their chocolate cupcake with chocolate buttercream. At first site, it reminded me a lot like the cupcakes at American Cupcake. It looked like them and the price was the same, $3.00 and they were even packaged the same. It’s a good sized cupcake that my wife and I could share. 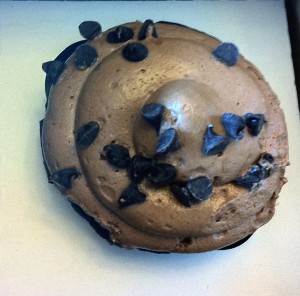 We got home and scooped into it. Not bad actually, for the Sunset district I’d have to give it a WOW because you don’t find cupcakes like that out here. We usually only have the Safeway or Lucky’s cupcakes that taste like bad homemade cupcakes. I’ll give them a 3/5 for potential to get even better. The cupcake itself is dense, but moist. There was an intense chocolate flavor that probably came from the chocolate chips inside it. The buttercream frosting was more like a foam than a real frosting which counter balanced the density of the cupcake. Many people don’t like buttercream frostings because they’re usually too sweet, but this was pretty good and not overly sweet.

The place looks like a very nice coffee shop inside with two large flat screen TV’s and free wi-fi [bonus!] The staff is nice and accommodating and while you’d think they’re just cupcakes they have a few other pastries to choose from. They also serve breakfast, but our daughter had fallen asleep in the car and woke up a little grouchy so we didn’t really have time to look around too much. From doing a little google snooping I also found out that the owner, Genesis gives cupcakes to local organizations. Good for him!

Nice place give it a try. I’m glad to see there are a few hipper businesses coming to the Westside. We need to pull in the hip start up crowd out here so most of the people who live here don’t have to travel so far to get to work.