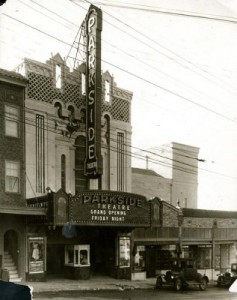 I watched a movie the other day called American Grindhouse [if you’re into film making you should see this]. I’d learned more about the genre than I could from the Quentin Tarantino movie of the same name. This stirred up some memories in my mind of the old Parkside Theater which was a top notch theater in it’s day, but took a turn towards the Grindhouse genre when it was sold and became the Fox-Parkside as we all knew it.

Grindhouse films were always low budget films that focused on many seedier ideas such as T&A, gratuitous gore, racial exploitation or all of the above. For me, after seeing American Grindhouse I had to see some of these films that I wasn’t old enough to see as a kid because most were made in the early 70’s and I wouldn’t turn 18 until 1980. WOW! Now I know why people were talking about Pam Grier films. She was always having clothes come off in her movies. I couple of little know grindhouse girls who showed up frequently were Anitra Ford who was the first female model on the Price is Right. The other was Victoria Vetri who was the 1968 Playboy Playmate of the Year and born in San Francisco [and that was also the first issue of Playboy I ever got to see!] 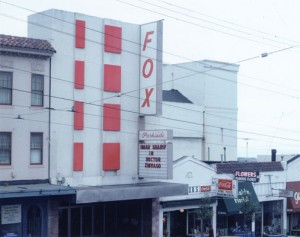 The titles of these films pretty much told you what to expect in the films, The Big Bird Cage, Caged Heat, Invasion of the Bee Girls. You knew that there would be lots of nakedness in these films. I knew it, even though I never got to see one of them until recently. So how does the Parkside fit into this? Well when I was in 2 & 3 grade they were a first run theater or close to first run. They had a thing during the summer where your parents would buy you tickets for Tuesday or Wednesday matinees so your parents could get rid of you for a few hours. I still remember buying Mike and Ike’s, Good and Plenties or Red Vines at the food counter which were larger than a box you would buy today [the Red Vines are about the same size] and it would cost you 16¢. The extra penny was to cover tax. I may be dating myself here, but you could go to a movie with $5 get in see the movie with popcorn and a drink and come out with change.

It was a respectable theater for the most part. Not one of the bigger theaters like you’d find downtown or in higher class neighborhoods, but it was a good working class theater. Then something changed…

In the 70’s it was sold off [1976 according to my my friend Woody at the Western Neighborhoods Project]. Things changed. The seats were pulled out of the downstairs and during the day it was a daycare center for kids. At night it ran grindhouse pictures or when they could get them older movies like Dr. Zhvago [always a big one they’d show]. Blacula, SuperFly, the aforementioned movies where all weekday evening movies. On Friday’s and Saturdays it was a different kind of grind house. I think smokehouse would have been more appropriate. Friday’s the fun started at 6pm and on Saturday’s it would start at noon. They would run every rock music film from the 60’s or 70’s they could find and seating was moved to the balcony. I remember a few nights when you could barely see the screen for the amount of pot smoke floating around. You would hear the clanking of beer bottles and people would be making deals trading beer for joints or vice versa.

The bathrooms upstairs were a good place for people to exchange drugs and liquor and puke. Back then they were pretty in line people that wouldn’t throw up on the way to bathroom, but knew their limit enough to get to the bathroom first. I think because of that time I have films like Jimi Play’s Berkeley, Woodstock, Tommy, Song Remains the Same as god knows how many other movies burned into my brain. I can’t always remember their names, but I know there were a couple with Pink Floyd, Santana, Janis Joplin [not at Woodstock]. It was like I was living through the 60’s again only I was old enough to understand it now.

Note that all the movie links above are only to the Wikipedia references, but if you have NetFlix you can stream them and see how open the movie industry used to be. The only scary part about watching these films today is I remember how hot some of these women were back then only to discover that most of them are turning 70 or older this year. Yes, your Grandma had sex.