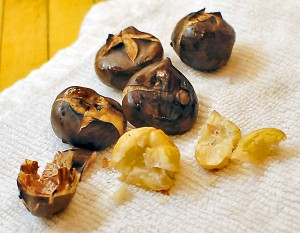 Well, it’s the Christmas season and many years ago while attending the Dickens Faire in San Francisco we walked out and found a guy selling roasted chestnuts. This of course brought back to my mind the old song line Chestnuts roasting on an open fire… so I had to try some to see what they were about. I think we paid about $2 for  a newspaper wrapped cone of them. I was lucky enough to be able to try them again because some friends of mine dropped by last night and handed me a bag of them  That they had gotten from Skyline Chestnuts that they wanted to share with us.

Now I haven’t had a chance to roast these yet, but I have to say after looking at these nuts before they’re in the sellable form they’re pretty ugly. They look a bit like a hairy scrotum to be honest and to understand the reason why people would want to pop one of these in their mouth is kind of like my old question about broccoli, why would anyone be interested in eating something that smells like ass when it’s being cooked? Well chestnuts are different. After being roasted they have the consistency of a baked potato, but with a nutty and buttery flavor that rather interesting and no to shocking in taste. They don’t taste like ass one bit, but can actually be rather enjoyable.

I never had learned how to roast them as my family never got into them so I did some research and found that the trick is to first split them in a X shaped pattern prior to roasting them. Then pop them in an oven at about 425° for about 20 minutes turning them halfway. If you want them to have a more moist texture you should cut the X then soak them in water. Salted or not. I’m thinking salted water soak is the way I’ll go for these.

Christmas is one of those holidays that I don’t associate with Jesus being nailed to a pine tree. I just like the tree with the ornaments and lights and the warmth of your home in the winter cold that is hitting San Francisco this year. This time of the year is a time to celebrate the fact that we’ve made it through another year and hoping for ourselves and our friends that next year will be even better. If sticking a few hot salty nuts in my mouth helps bring this about, well then so be it.