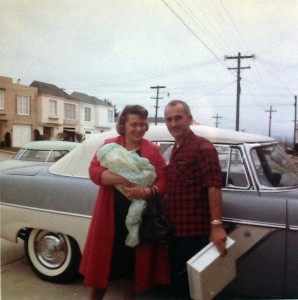 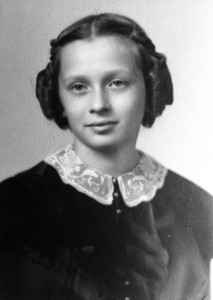 A year ago today marks the day my wife and I found my Mother dead watching TV in our house. That is still a hard day to think about because I don’t really like death. I don’t think anyone does, but I was a 5 year old that was afraid of dying. I suppose that’s when I first understood what it really meant. But I didn’t come here to write a downer piece for today. So let me tell you a little bit about my Mom.

She was born on May 28th, of 1929. That’s seems like a long time ago and you’re right, it was. She was the first of our family born in San Francisco. My family leaning toward the Italian side lived in the Marina when they moved here. Back then my mother told me she as a kid could remember there were still people having ice delivered to their houses for their ice boxes. Being a little girl starting her not too long before the great depression life probably sucked a bit for her, but my family being the type they were stuck together to get through it.

Once she entered her teens she joined the Girl Scouts and was very active with the environment before it was a popular thing to do. She was quite into camping and hiking and seeing as times were simpler then and she didn’t have access to all the new toys like we do she had dolls and a dollhouse that were made by my Grandfather supplemented with a few store bought dolls. In the summers at girl scout camp she would have fun tossing “cow chips”. When you think about it and she never said it, but it would have been a good line, “Why in my day we didn’t have World of Warcraft. When we wanted to have fun we threw dried up cow shit!”

We had family who lived up in Jackson, California which from the pictures back then it was pretty much a farm, so my Mom was a city girl who was raised on a farm part time. Because Jackson had a large population of Native Americans who were the original owners of the land she became interested in their culture and left us with a huge collection of “indian baskets” most of these were from the California tribes, but she did have a few items from the Navajo and Hopi’s, most notable are the collection of Hopi Kachina dolls we have hanging on our walls. What she never told me and we didn’t find this out until we started going through her stuff is that she also had a keen interest in the local Ohlone tribe’s language and it looked like she was either writing a book or just collecting research.

When World War II hit she would spend her days after school at St. Bridgette’s helping out the military by either scanning the skies off the coast for incoming aircraft from the other side to helping out with mapping in the staging areas at the presidio. I suppose they didn’t have child labor laws back then like we do today.

As she grew older she ended up attending SFSU and graduating with a teaching degree and got a job at Francis Scott Key out here in the Sunset working for the city’s then Childcare program. It was nothing like it is today, but it was more like pre-school and a little bit later for kids that couldn’t afford a private school.

Then one fateful Christmas day as my family was gathered into the car to go to someone in our families house for dinner they stopped on a gas station on Lombard street and my Mom saw a gas station attendant that she felt sorry for because he had to work on Christmas. It turns out that a few years later this man would one day become my Dad. For the life of my I can’t remember their wedding anniversary, but then again, I wasn’t there but sometime after that day came me. My Mom had had lots of trouble and after nine miscarriages they finally decided to adopt and that’s where I came into the picture. Adopting was a kind of hush hush thing back then and my parents arranged for a private adoption that only close friends and family knew of. I never would have known myself had I not been snooping around and found the paperwork when I was around ten. Even back then I was a devious kid.

Once I came along she became a stay at home Mom and never worked again. After I got older though she started focusing on her cooking and that is what she will always be most remembered for. If she taught me anything, my Mom taught me to enjoy what you eat and that you can make it from scratch easier than you can buy it from the store [well back then at least]. My Mom would always over cook for most of her life. She and my Grandmother would make vats of minestrone soup or bolognese sauce which was known in my family as Italian gravy. When they were available she would get pickling cucumbers and make pickles. Everyone my Dad worked with and all our neighbors got some along with the gravy and soup which we always had frozen in our big basement freezer.

Mom’s dessert’s were to die for. She could take a package of cake mix and make a few changes and you’d think it came from an uppity bakery that would have charged you ten times what it cost to produce. She made creme puffs and eclairs and cookies that it’s no wonder all the kids liked coming over to my house to play because they always got good food and plenty of it.

I think things started to go downhill for her when my Dad and Grandmother died back in 1999. They died a month apart and my mother had just undergone her fifth hip replacement surgery and the world crashed around her. Her favorite dog Shelly died a couple of months after our daughter was born and if we didn’t have our daughter she probably would have followed the dog in weeks. She at least got to be a Grandmother for a few years and she loved that more than anything else.

The saddest thing to me though is that all I have left of my Mom now are memories that can fit on one piece of paper. Guys, talk to your parents, because one day they won’t be around anymore. Yeah, they can be real assholes at times, but you might learn something from them.